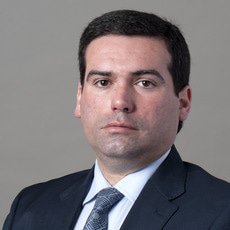 A partner at Cuatrecasas since 2016, Lourenço Vilhena de Freitas has been a member of the Portuguese Bar Association since 1996. He obtained the highest grade on aggregate (muito bom).

A tenured professor at Universidade de Lisboa since 2011, where he holds the regency in several subjects and coordinates the Energy Law Project. Lourenço also lectures at Universidade Nova de Lisboa.

Member of the group of experts of UN SCAD (United Nations Security Council Affairs Division), he is also arbitrator at CAAD (Administrative Arbitration Centre) and former vice-president of the Centre for Arbitration and Litigation at Universidade de Lisboa.