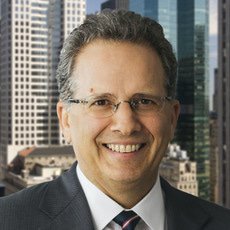 Dominick Conde is a partner at Venable LLP and is widely recognised for his experience and accomplishments in patent litigation. For almost 30 years, Mr Conde has tried and argued patent cases, including arguing numerous cases before the Court of Appeals for the Federal Circuit, and United States District Courts. He is active in all aspects of the firm’s patent practice, focusing particularly on large-scale litigation matters related to chemistry, pharmaceuticals, and pharmaceutical devices and diagnostics. He has appeared and been lead counsel for numerous major international companies including Astellas Pharma, Bristol-Myers Squibb, Daiichi Sankyo, Eli Lilly & Co, Entegris, LEO Pharma, Merck & Co, Pfizer, Reckitt-Benckiser, Reliable Sprinkler Company, Sanofi-Aventis, Novartis, Aralez Pharmaceuticals, Pernix Therapeutics and Warner Chilcott.

Mr Conde has been widely recognised by many publications as a leader in the life sciences field. He has been recognised as a leading patent lawyer by Chambers (2011 to 2019); recognised as a top intellectual property law practitioner by Best Lawyers in America (2011, 2014 to 2019); recognised as a leading patent litigator by Legal 500 (2008, 2009, 2011, 2012, 2014 to 2018); named a Leading Lawyer, LMG Life Sciences (2012 to 2018); named a Top 10 Life Science Litigator, Managing Intellectual Property (2013 to 2015); named an IP Star, Managing Intellectual Property (2013 to 2018); and in 2015 received the Burton Award for writing an article in New York Law Journal. Clients have also recognised his skills, talent and expertise: ‘He sees the forest through the trees and never gets tunnel vision. He also understands the need to find business solutions to legal problems and is very pragmatic.’(IAM Patent 1000: The World’s Leading Patent Practitioners 2015); ‘an intellectual giant, but one who can distill complex patent issues into clear, concise and cogent language that anyone can understand. Business leaders like him because of his clarity. Attorneys like him because they know his direct advice is grounded in thorough legal analysis and experience’ (Best Lawyers 2014); ‘completely stands out in terms of raw intelligence, lawyering skills and putting together the perfect case’ (Chambers USA 2013); and ‘superb litigator’ (IAM Patent 1000 The World’s Leading Patent Practitioners 2013); ‘the best trial lawyer in the country for complex medical cases’ (The Legal 500 2012); ‘an outstanding strategist and litigator. If you end up going to trial, he is amazing – nothing gets by him.’ (The Legal 500 2011).

To aid practitioners who are navigating the ever-changing landscape of global intellectual property, we now present the eighth edition of The Intellectual Property Review. In this edition, we present 24 chapters that provide an overview of the forms of intellectual property coverage available in each particular jurisdiction, along with an update of its most recent developments. Each chapter is written and assembled by leading practitioners in that jurisdiction.