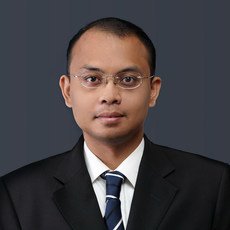 Ayik Candrawulan Gunadi joined ABNR as in September 2001 and became a partner on October 2013. He graduated in 1997 from the Faculty of Law, Parahyangan Catholic University, majoring in Economic and Business Law, and in 2000 completed his LL.M programme at the Erasmus University Rotterdam, the Netherlands, majoring in Business and Trade Law.

Before joining ABNR, he worked for a law firm and reputable insurance company in Indonesia. He also worked in the Netherlands, as foreign trainee with an international legal and tax consultants in Rotterdam, and thereafter with a Dutch Bank in Amsterdam. He has extensive experience in matters involving corporate law, foreign investment, intellectual property and project finance, and has been actively involved in infrastructure projects in Indonesia. He is involved in the issuance of PT KAI first corporate bond to finance the development of Soekarno-Hatta International Airport Integrated Railway, involving in the ongoing financing of the LRT Jakarta Bogor Depok Bekasi Project with investment value of approximately IDR 29.9 trillion as well as in the development of 2x660MW Tanjung Jati A Coal Fired Steam Power Plant in Cirebon. He is also involved in the issuance of US$ 40 billion GMTN by the Government of Republic Indonesia. He is ranked by IFLR1000 and The Asia Pacific Legal 500 in various practice areas.