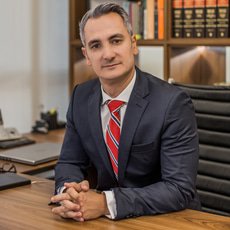 Founding partner of Sion Advogados. Postdoctoral candidate at Universidad de Salamanca, Spain. Ph.D candidate at Universidade Autónoma de Lisboa, Portugal (credits completed). L.LM in international commercial law (University of California, USA). Postgraduate degrees in constitutional law and in civil law and civil procedure law at FGV. Bachelor degrees in Law and in Business Administration. He was a legal counsel (2001 a 2011) at Vale, MMX and Anglo American. In MMX, Alexandre Sion served as legal officer and in Anglo American he served as Chief Counsel of Regulatory Affairs to the Anglo American Group in Brazil. National Vice-President of Brazilian Union of Environmental Law – UBAA (). Consultant at the National Commission of Environmental Law of Brazilian Bar Association (OAB). President of the Commission of Infrastructure of the Brazilian Bar Association in the state of Minas Gerais. Member of the Commissions Mining Law, Environmental Law, Arbitration and Mediation, Energy, Construction Law and Corporative Law (2010-2012) of OAB/MG. Member of the Commission of Infrastructure, Logistics and Sustainable Development of OAB/SP. Member of the Commission of Anti-Corruption and Compliance of OAB/RJ. Law school professor since 2004. Active lecturer in different capitals and author of a variety of legal articles.