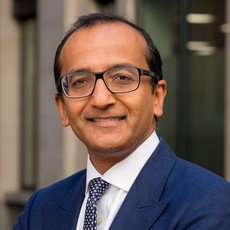 Suhrud Mehta serves as co-managing partner of the London office of Milbank, Tweed, Hadley & McCloy, co-head of the leveraged finance and capital markets practice in London and a member of the Financial Restructuring Group.

Suhrud focuses mainly on leveraged finance and restructuring transactions with a focus on multi-tiered capital structures: across the full range of bank and bond and bank mezzanine and holdco PIK transactions. He has advised on some of the most significant cross-border, public to private, leveraged, infrastructure and investment grade financings in the London/European market.

Suhrud has been recognised as a leader in his field by a number of journals, among them: Chambers UK (which designated him among the 1st tier of banking lawyers in London), Chambers Global, Chambers Europe, Legal 500, Who's Who Legal, Super Lawyers and Legal Business (where he was named as one of the leading finance lawyers/rainmakers in London).

He has been described by Chambers UK as “driven and technically gifted”, “extremely clever, industrious, superb technically, commercial in his outlook, responsive and dynamic” and by clients as “one of the best we've worked with, with an exceptionally commercial view of transactions.”

He is the author of a number of articles published in International Financial Law Review and regularly speaks at conferences.