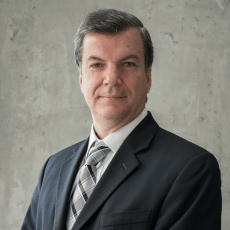 Edgar Odio is a partner of Facio&Cañas since February 2020. is a founding partner of Pragma Legal. He has been licensed to practise law in Costa Rica since 1989. He has a master’s degree in economic development from Essex University, and a postgraduate in EU competition law and economics for competition from King’s College London.
His practice focuses on competition law, consumer protection, foreign investment and mergers and acquisitions, and foreign investment. He has served as a local consultant for the Competition for Latin America Programme (COMPAL) implemented by the United Nations Conference for Trade and Development (UNCTAD) to draft the amendment to the competition law. He served for four years as member of COPROCOM, the local competitions authority. He served as senior adviser in competition for UNCTAD in Geneva, Switzerland, and is wasa member of the Advisory Group of Experts of COMPAL. In this capacity, he has participated in training and advisory missions to countries including Bolivia and Guatemala. He teaches a competition law course at University of La Salle and a postgraduate course on competition and intellectual property at UNED, the adistance learning university. He is regularly invited to workshops and training sessions by local and multinational companies, and continuously offers advice on competition matters to local and foreign clients.