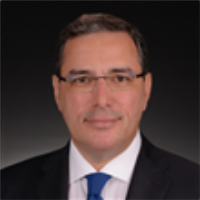 Ali’s track record includes a great variety of contentious and non-contentious matters primarily in aviation, shipping, finance and insurance. He has represented insurers, airlines and other entities in air crash litigation and settlements, commercial disputes, regulatory matters and a host of other legal matters concerning aviation. He has advised and represented lessors and financiers in aircraft transactions, and has carried out aircraft and ship repossessions. He holds a commercial pilot licence with multi-engine and instrument ratings. He is also a court-accredited pilot and lawyer expert witness on civil aviation matters, including aviation incidents and accidents. He is a member of the Royal Aeronautical Society.

Ali Kartal got his law degree at the Ankara University Law School. He completed his apprenticeship at Aybay & Aybay and got his licence for practising law in 1987 in Istanbul. He then started working for Pekin & Pekin, gaining experience in the financial services and banking sector. In 1989 he joined IBM Turkey as in-house counsel. In the meantime, his love of aviation and aircraft compelled him to learn how to fly, and he gained his commercial pilot licence in the US in 1994.

In 1994 he joined Aybay & Aybay again, a firm well known at the time for shipping and insurance. His experience in aviation did not go unnoticed, and the firm soon started getting assignments from the aviation sector. Ali was the managing partner of the firm between 2002 and 2016. Upon the dissolution of Aybay & Aybay in 2016, he started his own firm.

The following is a small sample of cases in which Ali has been involved as a lawyer or expert witness: Spanair 5022 near Madrid, 2005; Aeroflot 821 near Perm, 2008; Air France 447 over the Atlantic Ocean; the fatal crash of a chartered Moldovan Antonov B26-100, north of Baghdad, Iraq; the fatal crash of a Beech KingAir B350 at Istanbul Ataturk Airport, Turkey; litigation arising from a dispute concerning slot allocation and fines for slot misuse; numerous disputes between flight crew and airlines or other employers; disputes between Eurocontrol and airlines over route charges; a ground collision between an A340 and a de-icing vehicle, resulting in the death of the boom operator; and a dispute arising from cross-border leasing of firefighting helicopters.