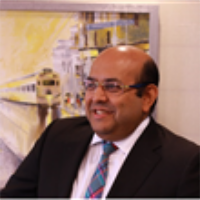 Amitava Majumdar (Raja) is the founding Managing Partner of Bose & Mitra & Co. He has consistently been rated as a Band-1/foremost lawyer in shipping by reputed organisations such as Chambers & Partners, Legal 500, India Business Law Journal etc. and Bose & Mitra & Co. under his helm has consistently been rated as a Tier-1 Law Firm in shipping for both Chambers & Partners and Legal 500.

His expertise encapsulates all facets in shipping and trade which inter alia includes contentious and non-contentious matters and regulatory practice. He has acted for shipowners, charterers, IG P&I Clubs, Government of India, oil and commodity traders in shipping related disputes wherein he regularly appears and argues before all the High Courts of India including Gujarat, Bombay, Karnataka, Kerala, Madras, Calcutta, Andhra Pradesh, Delhi and the Supreme Court of India, and in major commercial and maritime arbitrations in India, London and Singapore. He has also represented the Indian Delegation at the Legal Committee Meetings in the IMO.

In addition to having a high standing for dealing with contentious maritime disputes, he also specializes in complex shipping transactions including but not limited to ship finance, structuring, ship sale and purchase and in assisting foreign shipping companies wade through the Indian legislative framework (including regulatory and taxation issues) and has been a constant fixture in closings across the world.

Additionally, he has been an Expert Witness and has provided Expert Opinions and evidence on Indian law and Indian civil procedure in foreign-seated arbitrations as well as in commercial matters before the English High Court and the Singapore High Court.