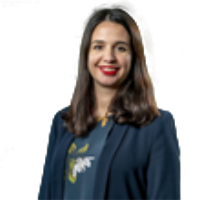 Blanca Arlabán Gabeiras is a partner in the banking and finance practice area. She joined Uría Menéndez in 2007. Between March and September 2010, Blanca worked in the London office of Slaughter and May, where she was an international secondee in the banking and financing team. Blanca has worked in the London office of Uría Menéndez since January 2014. In 2016, she was seconded to Goldman Sachs International in London for six months. In her professional practice, Blanca focuses mainly on financing, restructuring, mergers and acquisitions, and general commercial law.

Blanca has advised on some of the most complex and innovative financing and restructuring transactions in Spain in recent years, including the largest international restructuring (by value) completed in Spain, one of the largest of its kind in Europe. Blanca’s experience of cross-border financing transactions is extensive, and she has recently advised on a number of asset and corporate financing transactions, as well as various distressed debt and real estate portfolio acquisitions. She advises a wide range of clients, including corporates, financial institutions and funds, and is highly accustomed to working with international as well as domestic clients.

Blanca has been an assistant professor at lectures on the master’s degree programme at the University of Navarra and has spoken at various seminars in her field.