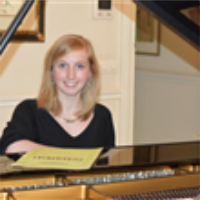 At a personal level, Charlotte is involved in various artistic projects (such as cultural exchanges, she is also pianist in a music band).