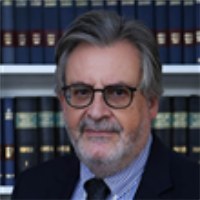 Dr Christos Clerides got his LLB (Hons) from Brunel University, Uxbridge, having been awarded first prize for the best examination performance in 1976. In 1977 he received his LLM specialising in maritime law, carriage of goods by sea, marine insurance and general insurance from University College London. His performance made him eligible for a scholarship. In 1981 he was awarded his PhD at King’s College London (KCL), specialising in EEC law. For his PhD at KCL he worked under the supervision of Professor A Chloros, later the Greek judge of the European Court of Justice, and Professor Francis Jacobs, later Advocate General of the European Court of Justice in Luxembourg.

He worked in England as part of his LLB (Hons) sandwich course with CITY Solicitors, Barlow, Lyde and Gilbert, under the supervision of the late President of the Law Society, Sir Denis Marshall. He was called to the Cyprus Bar in 1982. He is a practising advocate and has been head of the Nicosia office since 1982.

He was deputy chair of the New Horizons Party and an elected member of the House of Representatives of the Nicosia district (2001–2006), and an elected deputy in 2006–2011 of the European Party.

He was a member of the National Council, the highest authority advising the President of the Republic on the Cyprus problem, until December 2004.

He has also attended numerous meetings regarding the Mediterranean dialogue of the NATO Assembly. He has written numerous studies and articles in legal affairs magazines and in the local press. He served as a member of the Family Law Reform Committee (1983– 1986), the report of which was adopted in substance culminating in the amendment of the Cyprus Constitution and the introduction of the New Family Law in Cyprus, abolishing the exclusive jurisdiction of the Ecclesiastical Court in matters of divorce.

He has participated in and organised numerous human rights conferences and meetings in Cyprus.

He is head of the law department at Frederick University, where he has taught since 2012. Dr Clerides was recently elected as a professor of European and civil law at the University.

He has written three published legal books since 2017: Advocacy in Cyprus, The Cyprus Legal System and Evidence Law in Cyprus.