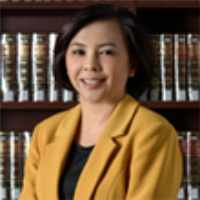 Daphne Ruby B Grasparil has 16 years’ experience in various area of law, including corporate law, focusing on the establishment of shipping enterprises and obtaining government licences and regulatory approval, and crew claims, in which she acts for shipowners, P&I clubs and crewing companies for disability claims and termination cases before the National Labour Relations Commission.

Ms Grasparil obtained her BA in economics and juris doctor degrees both from Ateneo de Manila University. She was admitted to the Philippine Bar in 1996.