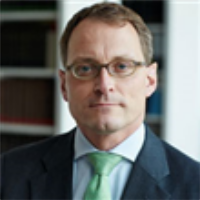 Henning Bälz, born in 1968, studied law in Tübingen, Berlin and Bayreuth. After his studies, he worked as a law apprentice with the Higher Regional Court of Berlin and as a university assistant. He received his doctorate in law from the Freie Universität Berlin in 2001 with a thesis on information rights of shareholders in a stock corporation. Henning joined the Berlin office of Hengeler Mueller in 1999, and worked for one year as a foreign associate at Simpson Thacher & Bartlett in New York (2000 to 2001) and for almost one year in the Frankfurt office of Hengeler Mueller (2001 to 2002). He became a partner in 2004 and is a member of the dispute resolution group of Hengeler Mueller dealing with both litigation and arbitration cases for national and international clients. The focus of his work is on post-M&A matters and contract law in general, as well as matters regarding infrastructure projects.