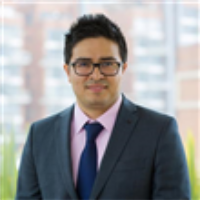 Coordinator of the Public Law Practice Area of ​​Brigard Urrutia. Lawyer with 10 years of experience in public law issues and infrastructure projects. He graduated from the Colegio Mayor de Nuestra Señora del Rosario (2010, Bogotá DC), in 2013 he obtained a Master's degree in Administrative Law and in 2014 he obtained the title of Specialist in State Contracting and its Management at the same University. Subsequently, in 2017 he completed his international master's degree MSc in Public Policy and Administration at the London School of Economics and Political Science - LSE, after being selected as a beneficiary of a loan-scholarship granted by Colfuturo.

He has actively participated in consultancies provided to public and mixed entities with different contracting regimes and in consultancies with the National Planning Department and other entities. Likewise, Julián Parra has advised multinational companies in their participation and / or structuring of Public-Private Associations (PPP) to develop road projects, mass transportation and social infrastructure in Colombia. He has recently advised several multinational companies on various legal aspects related to highway concessions (ie third, fourth and fifth generation highway concessions), concessions for the provision and operation of the fleet for the provision of the public passenger transport service. (ie

Julián has participated in several academic publications specialized in public administration, state contracting and infrastructure. Other publications include (i) Structural Impediments to Policy Learning: Lessons from Colombia's Road Concession Programs (In: Carter B. Casady & Julián D. Parra, 2020. International Journal of Public Administration, DOI: 10.1080 / 01900692.2020.1724142. ISSN: 0190-0692), (ii) Denaturation of exceptional clauses? (In: Infrastructure & Development. Colombian Chamber of Infrastructure. Magazine No. 59. May - June 2014. ISNN1794-3213) and (iii) The Fact of the Prince and the Theory of Unpredictability as causes that alter the Contractual Economic Balance in State Contracts (In: Araujo Oñate, Rocío, et al. “Law 1150 of 2007. A response to efficiency and transparency in state contracting? ”. Bogotá DC: Collection of Jurisprudence Texts of the Universidad del Rosario, 2011).