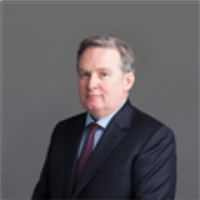 Mr Murphy was previously a corporate and securities partner in the United States with law firm Sonnenschein Nath & Rosenthal.

He is a member of the Prime Minister’s and Taoiseach’s IFSC Funds Group. This Committee advises on legislative and regulatory changes affecting the Irish investment funds industry. He is also immediate past chair of the Irish Funds Industry Association.