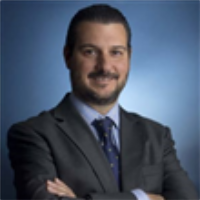 Luis Gerardo García Santos Coy is a partner and heads the competition and antitrust practice at the firm. He obtained his law degree (LLB) from the Ibero-American University in 1993. A survey published in Global Competition Review’s ‘40 under 40: the world’s brightest young antitrust lawyers and economists’ cited him as one of the world’s top young antitrust lawyers. Mr García has also been included in Who’s Who Legal: Competition since 2005, has been recognised by Chambers and Partners as an expert in the fields of M&A, corporate and competition/antitrust, and is listed in Practical Law Company, Best Lawyers and Expert Guides, as a leader among competition lawyers. He joined the firm in 1989 and specialises in competition law, mergers and acquisitions and corporate law. He is a member of the Mexican Bar Association.