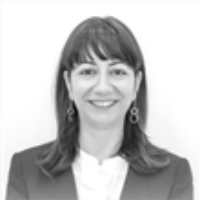 Maria Ch Kyriacou joined the firm in 2007, initially as a group leader in the corporate law department and is now leading the commercial, regulatory and IP law department. She has extensive experience in corporate and commercial law and has advised on a broad range of commercial transactions.

Prior to joining the firm, Maria completed a traineeship (stage) with the Second Board of Appeals of European Union Intellectual Property Office (at the time known as the Office for Harmonisation in the Internal Market), the EU agency for the registration of European Trade Marks, in Alicante, Spain. She subsequently worked in one of the leading and long-standing law firms in Cyprus and has also acted as a legal adviser to the President of the Cyprus Competition Commission for a year.

Maria achieved an LLB (Hons – Upper Second) at the London School of Economics and Political Science (LSE) and an LLM (Merit award) again at the LSE, with a specialisation in International and Comparative Intellectual Property Law.

She further obtained an LLM at Utrecht University, Netherlands with a specialisation in EU Law.