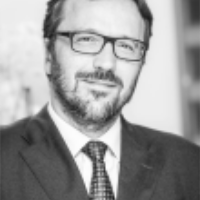 Michelangelo Cicogna is a partner in De Berti Jacchia’s Milan office. His practice over the past 20 years has mainly focused on arbitration, litigation and ADR.

As arbitrator, he has served as chair, sole arbitrator or co-arbitrator in a number of arbitrations under the ICC Rules, Milan Rules, PCA, AIA, DIS Rules, Swiss Rules and UNCITRAL Rules, as well as in ad hoc arbitrations.

He also regularly serves as mediator in international and domestic mediations.

He is fluent in Italian, English and French, and speaks some Spanish.