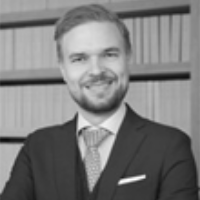 Pekka Pohjankoski (Mag iur, LLM, Esq) is a trainee judge at the District Court of Helsinki, Finland. He was previously Legal Secretary (référendaire) to Judge Allan Rosas at the Court of Justice of the European Union in 2012–2019. Prior to that, he served as Legal Officer in the Ministry for Foreign Affairs of Finland in the EU Litigation Unit (Legal Service).

Pekka holds the degrees of bachelor of laws and master of laws from University of Helsinki, an LLM from Harvard Law School, and is presently a part-time doctoral candidate at the University of Helsinki Faculty of Law. He is admitted to the New York State Bar in the United States. Pekka’s academic scholarship focuses on EU constitutional law, EU international relations and human rights law, as well as EU private international law. He has been a guest speaker at the Academy of European Law in Trier, Germany, at the European University Institute in Florence, Italy, at the University of St Gallen, Switzerland, among others.