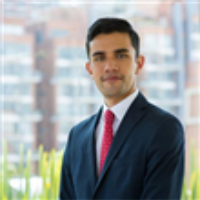 Lawyer from the Universidad del Rosario. Specialist in Administrative Law from the same University. Later he completed his LL.M in Law and Economics at the Erasmus University Rotterdam (Netherlands) and the University of Hamburg (Germany) where he studied after being awarded with the “Deutschlandstipendium” scholarship from the Ministry of Education and Research of the Government Federal German.

As a lawyer for Brigard Urrutia, he has advised national and international companies in the structuring, financing and execution of complex infrastructure projects, including highways, airports and mass transport systems, being part of the team of legal advisors of various concessions of the 4G program, as well as the largest public transportation projects in Bogotá (First Line of the Bogotá Metro, Regiotram, Transmilenio and SITP). Rafael has extensive experience in advising on participation in public and private tenders, structuring and negotiation of EPC and PPA contracts, contractual management of concession contracts, management of administrative and regulatory procedures before public entities. Further,