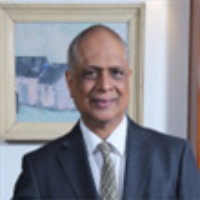 Mr. Kachwaha's practice focuses on corporate commercial laws, infrastructure projects, litigation and arbitration. He figures as a Band One lawyer in the Chambers Asia Arbitration Section from 2009 onwards. He also figures in Who's Who International in five sections: Arbitration; Construction; Procurement; Government Contracts and Asset Recovery. Mr. Kachwaha figures as a "Leading Individual" in the Dispute Resolution section of the Asia Pacific Legal 500. He also ranks in IBLJ's "A List" of "India's Top 35 Lawyers".

He has handled landmark litigation including the Union Carbide (Bhopal Gas Leak) case, where he worked directly under the team leader Mr. F.S. Nariman. This keenly contested case was then the largest damages action ever in the world.

Mr. Sumeet Kachwaha has also appeared as an expert witness on Indian law in landmark matters before the Courts of England & Singapore.

Mr. Sumeet Kachwaha’s academic writings have been referenced by the Law Commission of India in its Report dated February 2015 [Supplementary to Report No. 246 on Amendments to Arbitration and Conciliation Act, 1996]