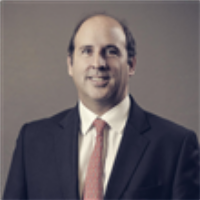 Tomás Allende has been a partner of the firm since 2016 when he re-joined as partner following eight years serving as Chief Regional Legal Counsel for Latin America for The Rohatyn Group. He started his career at EBV in 1995, where he was first appointed partner in 2006.

His practice areas include private equity funds, M&A, lending, and investments in conventional and renewable energy. He has participated in complex multijurisdictional fund structuring and also been involved in several M&A and financial transactions throughout the region. He also has broad experience in corporate governance of family companies. Tomás received his law degree from Universidad Católica Argentina (1997) and obtained his LL.M. from Duke University, North Carolina, USA (1988). He worked as foreign associate at Shearman & Sterling (New York, USA, 2000-2001) and as intern at Hughes Hubbard (New York, USA, 1997).

Tomás has been top-ranked in “best lawyers under 40” by Apertura magazine (an argentine business publication) from 2007 to 2014, and also honored as the best individual M&A lawyer for Latin America in 2011 by International Law Office (ILO) in association with the Association of Corporate Counsel (ACC).

He speaks Spanish, English and French.