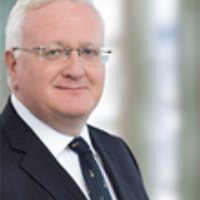 Vincent Power is a partner at A&L Goodbody and head of the firm’s EU, competition and procurement group. He has been described as ‘outstanding, hugely experienced and arguably the top competition lawyer in Ireland’.

Dr Power has been involved in most of the leading competition, merger control, EU, cartel and state aid cases in Ireland for over 20 years. He has a BCL from University College Cork, a BL from King’s Inns Dublin, and an LLM and a PhD from the University of Cambridge. He is an Irish solicitor.

In 2017, he won the ILO Client Choice Award in the category of EU Competition and Antitrust, which is awarded by The International Law Office in recognition of a partner from the entire 28 Member State European Union who excels across the full spectrum of client service. In 2018, he won the same award for Ireland. He received the ‘Irish Commercial Lawyer of the Year’ award at the Inaugural Irish Law Awards in 2012. He has been recommended by all the international legal guides: ‘one of the market’s most accomplished practitioners and celebrated for his breadth of knowledge and excellent advice. He is able to link his technical advice to the commercial realities’; ‘an authority on competition law, equally adept at state aid and merger control’; ‘applauded for his analytical ability and strong understanding of commercial imperatives’; an ‘acknowledged guru’ with an ‘encyclopaedic knowledge’; ‘a potent force’; and ‘has a great record in competition work’. He is said to do ‘an incredible job’ with ‘high levels of commitment’.

Dr Power is the author or editor of seven books, including Competition Law and Practice, Irish Competition Law and the award-winning EC Shipping Law. He was the first law graduate to be awarded the Distinguished Alumnus award from University College Cork. He is adjunct professor of law at University College Cork and visiting professor of EU law at Dalhousie University in Canada. He has chaired, been a member of and advised four government commissions and bodies.