The Anti-Bribery and Anti-Corruption Review - Edition 8

The eighth edition of The Anti-Bribery and Anti-Corruption Review presents the views and observations of leading anti-corruption practitioners in jurisdictions spanning the globe, including new chapters covering Argentina, Brazil, Chile, Colombia, Mexico, Peru and Venezuela. The comprehensive scope of this edition of the Review mirrors the scope of global anti-corruption activity and developments.

Over the past year, countries across the globe continued to bolster their domestic anti-bribery and anti-corruption laws, but shifting international relations and global economic competition may be undermining international cooperation. This is most clearly reflected in tensions between China and the United States and in recent comments by the chairman of the US Securities and Exchange Commission (SEC) that called into question the extent to which international cooperation is real or perceived, and whether deliberately asymmetric enforcement is disadvantaging US companies.

In China there were several notable legislative developments that affect anti-bribery and anti-corruption enforcement. The Standing Committee of the National People's Congress adopted amendments to the country's Anti-Unfair Competition Law, which came into force in January 2018. The amendments specify the range of prohibited recipients of bribes, expand the definition of prohibited bribery to include bribery for the purpose of obtaining a competitive advantage, impose, with limited exceptions, vicarious liability on employers for bribery committed by employees and provide for increased penalties. China also amended its Criminal Procedure Law to codify rules encouraging cooperation in government investigations and to permit trials in absentia, including for bribery and corruption. The new Chinese Supervision Law creates commissions with authority to supervise public functionaries and to detain suspects for prolonged periods while investigating corruption cases.

India and Japan also passed legislation bolstering their anti-corruption laws. The Indian Prevention of Corruption (Amendment) Act criminalises giving an 'undue advantage' to a public official, establishes criminal liability for companies and creates a specific offence penalising corporate management. The Japanese government has introduced a plea bargaining system, which allows individuals and companies to negotiate reduced criminal sentences in exchange for providing information regarding third parties suspected of or charged with enumerated offences, including crimes of corruption.

In Europe, the Italian parliament approved what is known as the 'bribe destroyer' law aimed at combating corruption in Italy's public sector. Among other things, the law increases the powers of prosecutors to investigate allegations of bribery, provides for increased penalties for individuals and increased sanctions for companies convicted for corruption and eases the statute of limitations for corruption cases. In Ukraine, as part of a US$3.9 billion loan programme with the International Monetary Fund aimed at prosecuting corruption and insulating court decisions from political pressure or bribery, former President Petro Poroshenko announced the launch of a special court to try corruption cases. The United Kingdom's Serious Fraud Office published guidance on corporate cooperation describing the steps a company can take if it wants to cooperate with prosecutors in an investigation, but the guidance is silent on the specific benefits of cooperation and does not guarantee any leniency for cooperative conduct. In addition, the European Parliament adopted a proposal for a Europe-wide whistle-blower directive aimed at defining the areas of EU law eligible for whistle-blowing and who qualifies for whistle-blower protections.

Despite these significant developments in national legislation around the world, SEC Chair Jay Clayton recently lamented that, although the SEC has 'vigorously enforced' the FCPA, it has done so 'largely alone' and 'other countries may be incentivized to play, and . . . are in fact playing, strategies that take advantage of [the SEC's] laudable efforts'. Similar sentiments may be behind the Foreign Extortion Prevention Act, proposed legislation introduced in the US Congress that would allow the DOJ to indict officials for demanding bribes to fulfil, neglect or violate their official duties.

Notwithstanding Chairman Clayton's remarks and the DOJ's China Initiative, senior DOJ officials have continued to affirm their commitment to international cooperation. The significant resolution, announced in March 2019, of the DOJ and SEC enforcement actions against Mobile TeleSystems PJSC, the Russian telecommunications provider, for grand corruption in Uzbekistan, relied on extensive international cooperation between US enforcement agencies and authorities in 13 different European countries, though notably not Russia or Uzbekistan. Likewise, the announcement this past June of a resolution with Technip FMC PLC, a London-headquartered provider of oil and gas technology services, relied on cooperation between the DOJ and Brazilian authorities, along with six European countries. Admittedly, however, both settlements have been years in the making and may not be an indication of the DOJ's current views on international cooperation. Even so, elsewhere in the world, most notably in the prosecution of bribery throughout Latin America, international cooperation remains a central feature of anti-corruption enforcement.

Given the numerous recent changes in domestic legal regimes, and the uncertainty in international relations, this book and the wealth of learning that it contains from around the world, will help guide practitioners and their clients when navigating the perils of corruption in foreign and transnational business, and in related internal and government investigations. I am grateful to all of the contributors for their support in producing this highly informative volume. 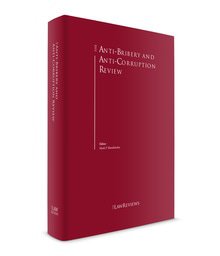