In its Report on Collective Redress in Switzerland of 3 July 20132 the Swiss Federal Council notes that Switzerland's mechanisms for collective redress are for practical purposes insufficient and partly unfit for the efficient and actual enforcement of mass and dispersed damages. There is, in particular, no class action available under Swiss law.3

The Swiss Federal Council notes that in this area of collective redress there is a gap in the system of legal protection that the legislator has so far not been willing to fill. On 2 March 2018, the Swiss Federal Council published a project for a revision of the Swiss Civil Procedure Code (ZPO) that also contains some steps towards collective redress.4 The proposals include (1) the extension of standing to claim monetary damages to representative associations on the basis of an opt-in;5 and (2) the introduction of a group settlement mechanism, with the resulting settlement to become binding on the entire class, subject, however, to individual opt-out.6

Both proposals were subject to a formal consultation process, which was open for comments by interested parties until 11 June 2018. The proposal of the 'reparatory associations' action', as provided for in Article 89a ZE-ZPO of the project for revision received disparate opinions.7 The views expressed ranged from endorsement and suggestions for improvement to questioning the very necessity to introduce means of collective redress of this kind. Currently the opinions are being evaluated prior to the Swiss government, the Federal Council, submitting the bill to the Federal Assembly along with the Federal Council's dispatch explaining the bill.

Under the current law, the most recent attempt at a class action-like suit was initiated by the Swiss consumer protection organisation Stiftung für Konsumentenschutz (SKS) before the Zurich Commercial Court against Volkswagen AG and Swiss car dealer AMAG on behalf of approximately 6,000 Volkswagen diesel car owners.8 They alleged that the sales of the vehicles were made under misleading statements, particularly as regards their emissions. In a first proceeding, SKS – in its own name but for the benefit of its members – brought an action for declaratory judgment under Article 10, Paragraph 2 in connection with Article 9, Paragraph 1c of the Federal Act Against Unfair Competition (UCA). SKS further lodged a second proceeding claiming individual damages in relation to certain individual car owners (Article 9, Paragraph 3 and Article, 10 Paragraph 2 UCA in connection with Article 41ff Code of Obligations), on the basis of individual assignments of the claims by the respective Volkswagen diesel car owners. On 12 July 2018, the Zurich Commercial Court decided not to consider the first suit on the grounds that the procedural requirement for the plaintiff to have a legitimate interest was not satisfied,9 as 'it is undisputed that the alleged infringing act ended on 18 September 2015' when the diesel motor ceased to be built into the 2015 vehicle model and no new cars equipped with this engine were put into circulation in Switzerland.10 Further, the Court added that, in light of the significant media attention, the car recall actions and the ban on registration of vehicles of this kind, the argument put forward by SKS of allegedly continued misrepresentation through misleading statements and advertising was not convincing.11

On 8 February 2019, the Federal Tribunal upheld the decision of the Zurich Commercial Court not to consider the first suit.12 On 6 December 2019, the Commercial Court of Zurich decided not to consider the second suit on the grounds that the plaintiff had no standing to initiate proceedings, as the plaintiff as a legal entity could only initiate proceedings within the scope of its purpose.13 The Court stated that an interpretation of the plaintiff's purpose, namely 'safeguarding the interests of consumers',14 would lead to the conclusion that the plaintiff could carry out activities for the totality of consumers, but could not take legal action to protect the interests of certain individual consumers as it had attempted to do in this action.15 The challenge is currently pending before the Federal Tribunal.16 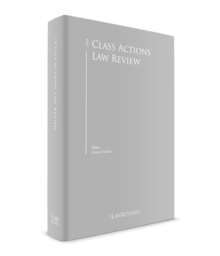 Other chapters on Switzerland

All titles on Switzerland