The year 2020 will of course go down in history as one of the most unusual and difficult years the world has faced in modern times. As we prepare this 10th edition of The Corporate Immigration Review for print, most of the world's immigration systems have ceased functioning with any semblance of normality.

All over the world, government policies and national strategies have been upended by the threat of covid-19. Macroeconomic policies have been ditched in favour of imposing lockdowns designed to protect public health. Cross-border cooperation and multilateral structures have been replaced by national self-preservation. Fiscal prudence has been sidelined by state intervention on a scale unprecedented in peacetime. The priority of all governments is the fight to protect public health and to keep the number of acute new illnesses within the capacity of national health systems. Everything else is secondary.

In this context, immigration policy development has taken a back seat. Our globalised economies are in the deep freeze, unable to move or trade normally across borders. National immigration laws are responding to the crisis by imposing temporary, and often draconian, controls on the ability of people to move across borders, in a way unthinkable just a few months ago. Strategic, long-term liberal reforms in the interests of global business transactions have been placed on hold while national governments confront the immediate threat from a virus that has zero regard for state boundaries.

It is difficult to know how long this situation will prevail. Economies cannot be locked down for long periods without having a cataclysmic impact on their ability to emerge unscathed, to bounce back with the vigour they benefited from before. Societies face an alarming choice between the dreadful losses inflicted by a virus and those inflicted by broken economies and unemployment.

Hopefully, by the time this edition hits your desks, the storm will have passed and the business world will be in 'bounce-back' territory, people will be moving around the world again for pleasure, business and economic development, and the horrors of the first half of the year will have been replaced by optimism and relief. We hope so.

A year ago, in very different circumstances, Brexit and its constituent brutal political logjam dominated the news agenda for UK legal practitioners and international observers. Back then it was very difficult to see how the country could find a way forward and resolve the pre-eminent political issue of our time. The changes in political leadership in London followed by a decisive general election result have resolved the problem definitively. At least, of course, until the current covid-19 crisis placed the whole project on hold.

Legally the United Kingdom left the EU on 31 January 2020. There is no going back – it is no longer possible to revoke Article 50. The country has entered a transition period until the 'true Brexit' date of 31 December 2020, when the country will leave the EU single market and separate definitively from the four freedoms contained therein. The year 2020 was set to be one of hard-fought, dynamic negotiations between London and Brussels. The negotiations are expected to place meat on the bones of the skeleton contained within the revised Political Declaration agreed between the parties in December 2019. Given the new rules around social distancing, as well as the fact that some of the principals have themselves tested positive for the virus, it is difficult to see how the timetable can be met. There is a vast range of complex topics to be agreed upon. Before covid-19, there was already doubt about whether the timetable was realistic. Now the time frame appears impossible.

It is now, however, a matter of law – the European Union (Withdrawal Agreement) Act 2020 prevents the United Kingdom from seeking an extension to the timetable. The Johnson government must either deliver on its much stated promise to 'get Brexit done' or change the law. It will be interesting to see whether the Prime Minister's legendary optimism will find a way through this new challenge.

The UK government is in the process of designing a new immigration framework for the country's future as an independent nation state. At the end of the transition period, the United Kingdom will leave the single market and the cross-border freedom of movement of people will no longer apply. The country will set its own rules regarding the conditions of entry, stay, work and long-term residence of citizens from outside the British Common Travel Area. The purpose of the new framework will be to ensure that the country remains open for business, attracting the skills and attributes needed by key sectors of the economy while at the same time reducing overall migration numbers and boosting the skills and opportunities of local workers.

Meeting all these objectives is a major policy challenge for ministers and their officials. Designing and implementing the legal and administrative architecture required to launch these changes by the end of the year, particularly in the context of the pandemic, is also a gargantuan task for the UK Home Office. By the time the 11th edition of The Corporate Immigration Review goes to press a year from now, perhaps the United Kingdom's new system will act as a template for a modern, innovative, focused immigration programme for dynamic economies around the world. We will have to wait and see.

In the United States and Canada, as elsewhere, long-term immigration reform has taken a backseat while North America grapples with the coronavirus crisis. As the November election approaches, the United States is entering the most intense period of its political cycle. It remains to be seen how presidential campaigns can be run with anything approaching normality in the age of social distancing.

President Trump had hoped to rely on a buoyant economy as the basis of the case he would put to the American people for re-election. That prosperous foundation is now in tatters as unemployment rises and the economy freezes in the shadow of covid-19. The President will undoubtedly deploy new arguments in his attempt to appeal to the US electorate. Among these, if he is true to form, will be an assault on outsiders. He is likely to heap opprobrium on external multilateral organisations, such as the World Health Organization and the United Nations. He is unlikely to offer a liberal approach to business immigration reform as part of his prospectus for the future.

Much will depend on the outcome of that election as the world emerges from the current crisis. Business immigration practitioners from all over the world, including many from the countries whose laws and systems are set out in this book, will be looking towards that emergence with hope. The desire is for a bounce-back based on the fundamental resilience of our global economy and international structures. We hope that businesses will be able mobilise their workforces into a new post-coronavirus dynamism.

As ever, we are grateful for all the outstanding contributions to this text. As we celebrate the 10th edition, we hope the 11th will be produced in the context of a greatly revitalised world. 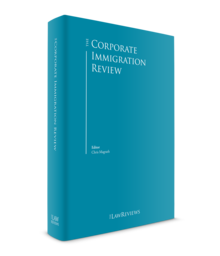