The Dispute Resolution Review provides an indispensable overview of the civil court systems of 32 jurisdictions. It offers a guide to those who are faced with disputes that frequently cross international boundaries. As is often the way in law, difficult and complex problems can be solved in a number of ways, and this edition demonstrates that there are many different ways to organise and operate a legal system successfully, as well as overcoming challenges that life and politics throws up along the way. At the same time, common problems often submit to common solutions, and the curious practitioner is likely to discover that many of the solutions adopted abroad are not so different from those closer to home.

Sitting here in London at the start of 2020, we at least have a better idea of the immediate direction of travel for Brexit. The UK will have left the EU by the time this edition goes to print. The road has been long and twisting and it has thrown up novel problems of when politics and law clash head on. The Supreme Court in the UK – not so long ago having completed its metamorphosis from the old judicial committee of the House of Lords – confirmed that it was the ultimate check against the unlawful exercise of power by the Executive; declaring that Boris Johnson's advice to the Queen to prorogue Parliament was unlawful (see the case summary of R (on the application of Miller) v. the Prime Minister in the England and Wales chapter of this edition). Politicians cried foul. There was (and still is) talk of reassessing how Supreme Court judges are selected; talk of political appointments (as in the US) and a fundamental rewriting of the Constitution (except there cannot be, as no one has written it down in the first place). The same judiciary that is often praised for its independence and professional approach was at times along the tortuous road to Brexit branded in the media 'enemies of the people', part of the growing band of 'traitors' who allegedly opposed Brexit – that is despite all the judgments making clear that they were not deciding whether Brexit should happen or on what terms.

Looking back on events, far from the collapse of the Constitution, the year saw a reaffirmation of the constitutional balance of powers and the rule of law. The Supreme Court spoke and was respected. Parliament was recalled and took an October no-deal exit off the table.

But politics perhaps had the final say: an election was called later in the year, the people made their choice, and Mr Johnson's Conservative government was returned with a sufficient majority to 'get Brexit done'.

All this leaves me writing this preface five days before 'Brexit Day', after an exhausting 2019 in which clients have not known whether to plan for the 'May deal', 'No deal', 'Boris's deal', a referendum (on Brexit and/or Scottish independence), no Brexit, or the extensive nationalisation of private industries and tax rises outlined in Labour's manifesto. At least we now know at the end of it all that the UK will leave the EU on 31 January 2020.

That is not to say that everything will be plain sailing from now. The process of disentangling the UK from the EU legal and political framework will be long and complex. Fundamental questions remain. No doubt the Supreme Court will be called on to determine issues that no one had ever thought would need to be asked not so long ago. The transitional deal with the EU expires at the end of the year and the government's position is that it will not be extended. The same questions and uncertainties will surface as the clock ticks down if a deal is not apparent.

Whatever your views on Brexit, this is law in action. It happens every day of the year, but when the stakes are so large and politicised, the scrutiny so intense, it is hard not to see and feel it a little bit more. This edition therefore includes an updated Brexit chapter that charts the progress over the past year and what lies ahead.

There is of course much more to 2019 and beyond than Brexit – especially away from these shores (where it has occupied so much of Parliament's time, to the detriment of other legislative programmes). This 12th edition follows the pattern of previous editions where leading practitioners in each jurisdiction set out an easily accessible guide to the key aspects of each jurisdiction's dispute resolution rules and practice, and developments over the past 12 months. The Dispute Resolution Review is also forward-looking, and the contributors offer their views on the likely future developments in each jurisdiction. Collectively, the chapters illustrate the continually evolving legal landscape, responsive to both global and local developments.

Finally, I would like to express my gratitude to all of the contributors from all of the jurisdictions represented in The Dispute Resolution Review. Their biographies can be found in Appendix 1 and highlight the wealth of experience and learning from which we are fortunate enough to benefit. I would also like to thank the whole team at Law Business Research who have excelled in managing a project of this size and scope, in getting it delivered on time and in adding a professional look and finish to the contributions. 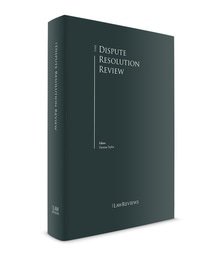