In our ninth year of writing and publishing The Energy Regulation and Markets Review, the most pressing global concerns have revolved around the covid-19 pandemic. Accordingly, many of our contributing authors have emphasised concerns associated with the effects of the crisis on energy demand and consumption, and delays in the development of infrastructure. Beyond this crisis, we have seen many other significant geopolitical changes that have added uncertainties to global energy policies. For example, oil prices have hit record lows, which has slowed exploration and production efforts, and has threatened economic stability for countries that depend upon oil revenues. The United Kingdom is now within its 11-month transition period to exit from the European Union (a process known as Brexit), creating uncertainties regarding the future of the UK's energy policies and its coordination and cooperation with the European Union, including with respect to commitments to reduce greenhouse gases (GHGs). The Trump administration's 'America First' trade policies have continued to alienate US allies and historical trading partners. Despite its withdrawal from the Paris Agreement and expressions of support from the Trump administration for the coal industry, the United States has continued its extensive investment in renewable generation resources. The 2011 Fukushima nuclear incident continues to affect energy policy in many countries. Finally, there are continued efforts to liberalise the energy sector globally.

Despite the US withdrawal from the Paris Agreement, we continue to see significant carbon reduction efforts globally, including increased use of renewable resources, and measures to improve energy efficiency and reduce demand.

In the United States, despite the Trump administration's support for the US coal industry, coal and other aged fossil fuel plants are retiring at an unprecedented rate. Additionally, many states have pushed for the procurement of thousands of megawatts of renewable resources, including from new offshore wind development projects on the east coast. However, the US Bureau of Ocean Energy Management has delayed granting approvals for offshore wind projects, and the Federal Energy Regulatory Commission has imposed regulatory restrictions on the ability of state-subsidised renewable energy projects to clear in the regional capacity markets through a minimum offer price rule to mitigate buyer market power.

The European Union issued a revised Renewable Energy Directive, which will take effect in 2021, targeting 32 per cent renewable consumption by 2030. Despite continued efforts to follow through on Brexit, the United Kingdom's renewable energy targets already exceed those of the European Union. France is seeking to double its wind and solar capacity and President Macron has announced a goal to close the remaining coal plants by 2022. Italy had previously targeted a 28 per cent reliance on renewable energy by 2030 but is now working to reach the 32 per cent target adopted by the European Union. Belgium has continued its significant offshore wind procurement efforts, and is seeking to reduce subsidies in future procurements. In Denmark, renewables already constitute 40 per cent of electricity consumption and the aim is to have all energy demand met by renewables by 2050. Germany will not meet its goal of reducing emissions by 40 per cent by 2020, or its goal to reduce energy consumption by 20 per cent as compared with 2008, but remains focused on the continued development of renewable generation, energy efficiency and conservation, as well as energy storage technologies. Poland has been struggling to meet the European Union renewable energy targets but has plans to develop offshore wind generation.

Japan has continued its efforts to develop solar and wind resources, including opening new sea areas for offshore wind. But the shutdown of most of its nuclear generation has resulted in a significant reliance upon natural gas, including liquefied natural gas, and reductions in renewable energy prices has caused a slowdown in new solar and wind development. China continues to have ambitious renewable energy goals, capping energy from coal generation to an amount equivalent to 5 billion tonnes and aiming to have 15 per cent of generation supplied by non-fossil fuel generation. Korea aims to generate 20 per cent of its power needs from renewable energy and has committed to cut GHGs by 37 per cent by 2030.

This year, Australia has reached almost 20 per cent reliance on renewable energy resources, including significant amounts of energy storage capacity (battery and pumped water) and South Africa increased its renewable independent power procurement efforts, with a goal of producing 17,800MW of renewable energy by 2030.

The United Arab Emirates aims to reduce its carbon footprint by 70 per cent by relying on 50 per cent renewable energy by 2050, and Abu Dhabi is seeking to reduce electricity consumption by 22 per cent by 2030. In Brazil, hydroelectric resources already constitute more than 60 per cent of its installed generation capacity, and efforts continue to increase wind and solar generation as the cost of renewable generation has decreased. Colombia has significant renewable energy resources and recently completed its first auctions for renewable projects, with 1,398MW awarded and installed.

For many countries, a reliable energy supply remains the primary concern, regardless of fuel source. As only 35 per cent of Myanmar is connected to the grid, there are continued efforts to electrify remote parts of the country. Lebanon is hoping to solicit bids for the development of 890MW on floating barges to increase electricity supply. Panama and Colombia continue to seek foreign investment.

South Africa is utilising its Integrated Resource Planning process with a goal of doubling its generation and transmission capacity by 2030. Australia is developing the Snowy Hydro Project, which, at 2,000MW, will be one of the largest pumped hydroelectric storage projects in the world. Colombia is developing a large hydroelectric project that is expected to produce up to 17 per cent of the country's energy needs, but that effort is hindered by construction delays.

In its eighth licensing round for oil and gas exploration in the North Sea, Denmark received five new applications, but owing to political pressure relating to GHGs, Denmark has put this licensing round on hold indefinitely.

Nine years after the Fukushima disaster, Japan has stopped operations at all but nine of its 48 nuclear power stations, and 11 nuclear power stations are in the process of being reviewed for restart under Japan's new stringent safety standards. Germany continues efforts to phase out all nuclear generation by 2022, and Belgium's nuclear plants have often been offline for maintenance for technical issues in the past few years. France was seeking to eliminate nuclear generation by 2025 but has extended that date to 2035. South Korea has continued its efforts to phase out nuclear power (replacing nuclear plants with new renewable facilities over time). South Africa's nuclear ambitions appear to be on hold at least until 2030.

However, the phasing out of nuclear energy is not universal. The United Arab Emirates' new 5,600MW Barakh nuclear power station is almost complete and one of its units is already operational. When all units are on-line, Barakh will supply 25 per cent of the emirates' electrical needs. Poland still intends to explore the development of nuclear power in the future. In the United States, even though the early retirement of certain nuclear plants has been driven by cost and power market considerations (rather than safety concerns), some states have passed legislation to subsidise nuclear energy to allow owners to continue to operate through zero emissions credit programmes, including Illinois, New York, New Jersey and Ohio, with similar legislation being considered in Pennsylvania.

iV LIBERALIsATION OF THE ENERGY SECTOR

We have seen significant energy sector regulatory reforms in many countries. The European Union has sought to continue efforts to centralise the regulation of the EU energy sector. France has taken significant steps towards further liberalisation of its energy sector. Japan has fully liberalised its electricity and gas sectors and is encouraging market entry. Australia has opened access to transmission through regulatory reforms to encourage entry into the generation market and is undertaking significant energy market reforms to send more accurate price signals to market participants. Brazil continues its efforts to implement net metering regulations this year. China has reduced subsidies for renewable energy, prices transmission and distribution rates based upon a cost-plus regulatory methodology, and has implemented a market-priced mechanism for pricing coal-based generation. The United Kingdom has implemented a competitive tender process for the development of offshore transmission. In the United States, while states have continued to subsidise nuclear and renewable generation, the Federal Energy Regulatory Commission has permitted regional markets to implement minimum offer price rules to combat buyer-side mitigation in an effort to maintain competitive capacity markets.

I would like to thank all the authors for their thoughtful consideration of the myriad interesting, yet challenging, issues that they have identified in their chapters in this ninth edition of The Energy Regulation and Markets Review. 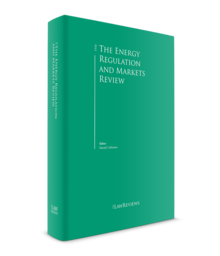 Since the first edition, this compendium has grown and now covers 20 jurisdictions in this third edition. Whether you are already active in his sector or merely interested in learning more about the policies, legal structures and state of play in the renewable energy industry globally or in a particular country, we hope that this guide will aid you in your efforts as a participant in an exciting and continually expanding industry.

The Oil and Gas Law Review is intended to serve as a starting point for practitioners in gaining an understanding of the key legal requirements in the jurisdictions in which they may be advising clients on transactional and operational matters. Although not a substitute for detailed local law advice, the hope is that it will nevertheless serve as a reference guide and point users in the right direction when considering local legal issues.