This seventh edition of The Foreign Investment Regulation Review provides a comprehensive guide to laws, regulations, policies and practices governing foreign investment in key international jurisdictions. It includes contributions from leading experts around the world from some of the most widely recognised law firms in their respective jurisdictions.

Foreign investment continues to garner a great deal of attention. This trend is expected to continue as the global economy further integrates, the number of cross-border and international transactions keeps increasing, and national governments continue to regulate foreign investment in their jurisdictions to an unprecedented degree. Reviews of cross-border mergers have, in some instances, been characterised recently by a rising tension between normative competition and antitrust considerations on the one hand, and national and public-interest considerations on the other; the latter sometimes weighing heavily against the former. As a result, more large, cross-border mergers are being scrutinised, delayed or thwarted by reviews that are progressively broad in scope.

Many factors are driving these emerging trends – the rise in populist political movements has increased the focus on national interest considerations such as protectionism; there are concerns over the export of jobs and industrial policy; heightened concerns over cybersecurity have led to enhanced national security protection measures; and an increased focus in some jurisdictions on the stream of capital flowing from state-owned enterprises has driven greater scrutiny of proposed investments, particularly those in economic sectors such as information technology and natural resources. Where, historically, national security concerns were limited to businesses involved in manufacturing or supplying military equipment and to infrastructure industries critical to national sovereignty, the scope of transactions reviewed on the basis of national security has broadened significantly. Transactions in sectors such as banking and finance, media, telecommunications, and other facets of the digital economy, as well as transportation industries and even real estate, may be potential focal points for foreign investment review.

Efforts to overhaul the regulatory landscape have been seen in the United States with the expansion of the review authority of the Committee of Foreign Investment in the United States (CFIUS), including a broadening of transactions under CFIUS's scrutiny. In turn, France is trying to generate support to revise the European Union's competition reviews to, among other things, more closely scrutinise mergers in the technology sector. Other major jurisdictions in Europe, including Germany and the United Kingdom, have shown greater interest in increased regulatory authority in regard to foreign investment reviews.

Differences in foreign investment regimes (including in the timing, procedure, thresholds for and substance of reviews) and the mandates of multiple agencies (often overlapping and sometimes conflicting) are contributing to the relatively uncertain and unpredictable foreign investment environment. This gives rise to greater risk of inconsistent decisions in multi-jurisdictional cases, with the potential for a significant 'chilling' effect on investment decisions and economic activity. Foreign investment regimes may be challenged by the need to strike the right balance between maintaining the flexibility required to reach an appropriate decision in any given case and creating rules that are sufficiently clear and predictable to ensure that the home jurisdiction offers the benefits of an attractive investment climate.

The American Bar Association Antitrust Law Section (ABA ALS) Task Force on National Interest and Competition Law has built on the work of the ABA ALS previous Task Force on Foreign Investment Review. It has looked more closely at the potential implications of national interest considerations and evolving breadth of national security reviews, including, in some cases, as they may relate to, or interface with, normative competition reviews. In so doing, the Task Force has examined a number of cases in selected jurisdictions where these issues have been brought to the forefront. In August 2019, the report of the Task Force was considered and approved by the Council of the ABA ALS.

These emerging trends and the evolving issues in the interface of foreign investment and competition reviews were the subject of panel discussions at the Annual Conference of the International Bar Association in Rome in October 2018 and the ABA ALS Global Seminar Series in Düsseldorf, Germany in May 2018, among others in recent years. The evolving issues have also attracted attention in recent years in international fora of public authorities, such as the International Competition Network and the Organisation for Economic Co-operation and Development's Competition Committee.

In the context of these significant developments, we hope this publication will prove to be a valuable guide for parties considering a transaction that may trigger a foreign investment review, which often occurs in parallel with competition reviews. It provides relevant information on, and insights into, the framework of laws and regulations governing foreign investment in each of the 17 featured jurisdictions, including the timing and mechanics of any required foreign investment approvals, and other jurisdiction-specific practices. The focus is on practical and strategic considerations, including the key steps for foreign investors planning a major acquisition, or otherwise seeking to do business in a particular jurisdiction. The recent trends and emerging issues described above and their implications are also examined in this publication. Parties would be well advised to thoroughly understand these issues and to engage with regulatory counsel early in the planning process so that deal risk can be properly assessed and managed.

We are thankful to each of the chapter authors and their firms for the time and expertise they have contributed to this publication, and also thank Law Business Research for its ongoing support in advancing such an important and relevant initiative.

Please note that the views expressed in this book are those of the authors and not those of their firms, any specific clients or the editors or publisher. 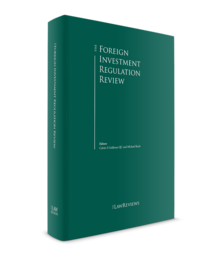