Since the publication of the fifth edition of The Franchise Law Review, there have been yet more major economic and geopolitical developments that have had a significant impact on world trade; the Sino-American trade war, the renewal of Iranian sanctions and Brexit being only three of these. Through all this, however, the apparently inexorable march towards the globalisation of commerce has continued unabated. Despite the slow emergence of a few economic bright spots, the global economy is not performing as well as it might, and there are concerns that the US economy may be approaching a crash.

Given the positive role that franchising can play in the world economy, it is important that legal practitioners have an appropriate understanding of how it is regulated around the globe. This book provides an introduction to the basic elements of international franchising and an overview of the way that it is regulated in 37 jurisdictions.

As will be apparent from the chapters of this book, there continues to be no homogenous approach to the regulation of franchising around the world. Some countries specifically regulate particular aspects of the franchising relationship. Of these, a number try to ensure an appropriate level of pre-contractual hygiene, while others focus instead on imposing mandatory terms upon the franchise relationship. Some do both. In certain countries, there is a requirement to register certain documents in a public register. Others restrict the manner in which third parties can be involved in helping franchisors meet potential franchisees. No two countries regulate franchising in the same way. Even those countries that have a well-developed regulatory environment seem unable to resist the temptation to continually develop and change their approaches – as is well illustrated by the recent changes to the Australian regulations. The inexorable march towards franchise regulation continues, with countries such as Argentina, which previously had not specifically regulated franchising, adopting franchise-specific laws over the past 12 months. 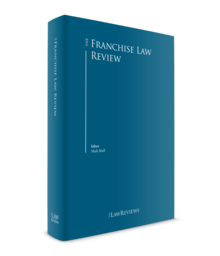