Welcome to the fourth edition of The Gambling Law Review.

One of the issues I have been wondering about while reviewing the fourth edition of The Gambling Law Review is what might be described as the Sorites paradox in reverse.1 First editions of books may well be the ones that are the most collectable, but they are probably not the most valuable for the reader. In years two and three, as an edition gathers size and age, it becomes established. But at what point does it stop being a project and become a tradition, an institution or (the ultimate accolade for any legal study) an authority?

I think it would be wrong to say that we are an authority yet. But, there are some very encouraging signs. We have new and notable contributions from Austria, Hong Kong and Cyprus. One must also mention those who have had to perform substantial re-writes, as with Malta, since the legislation there has been subject to considerable change.

This year, therefore, I am pleased again to say that the scope of coverage has increased to 30 chapters. So we may not yet be 'authoritative', but I hope that readers will agree that we are very well established. I am delighted to welcome the new authors and thank them each for their very valuable contributions, as I am also very pleased to thank those who have had found the time and resources to continue contributing to this work.

The primary purpose of this work is to provide a short summary of the gambling law of a wide range of jurisdictions and, so far as possible, to achieve that through a format that is both uniform enough to allow a comparison of the different legal systems but is also flexible enough to recognise that gambling law finds its home in different places depending upon the legal system in question. In some countries, it is founded in the criminal law, in other places it forms part of civil or administrative law. It is sometimes rooted in a common law and sometimes in a civil code tradition.

The second aim is to allow practitioners in the field to be updated on developments over the course of the year – with a section in each chapter dealing with both the main milestones of the last 12 months and the likely developments to come. And last, of course, it is a good way to bring together some of the leading lawyers in this fascinating field, so that they can stay in touch and communicate with each other – forming a network of knowledge and contacts upon which I hope our respective clients will rely.

Looking back, it feels as though the world has been a very busy place over the last 12 months. It is tempting to say that such a statement is just an error of perspective, and that in fact every year has its fair share of excitement – but events in America (both in the world of gambling and also more widely in politics), and the chaos of Brexit, which still surrounds me as I write, seem to justify putting 2018/19 into a special category.

But while the political environment seems to have been particularly fraught, political matters are often cyclical, reflecting movements between different ideologies and oscillating social attitudes. The more important changes have actually been technological, since they almost always lead to dramatic and irreversible changes.

So, let us focus on some important statistics. During 2018, the number of internet users in the world exceeded 4 billion (a 7 per cent year-on-year increase). Pausing there, that means that in 2018, more than 280 million people went online for the first time. Those new internet users, if brought together geographically, would form the fourth largest national population in the world.

In the same 12-month period the number of social media users increased by 13 per cent to 3.1 billion. Furthermore, during 2018 the world reached a total of more than 5.1 billion unique mobile phone users, meaning that two thirds of the world's population has access to mobile communication, with more than half of the handsets being smartphones. Mobile use has indeed eclipsed laptops and desktop computers. Internet penetration in Western Europe is at 92 per cent and in North America it is 88 per cent. Soon, everyone will have access to everything. And the everything is being delivered much more quickly. Average fixed internet speeds increased between 2017 and 2018 from 22Mbps to 46.12Mbps, an average of 26 per cent.

The amount of data we produce each year (about 16 zettabytes2) is already much more than would be necessary to record every word ever spoken by our species. In other words, the technology, and the ability to process, manipulate and model the universe mathematically has gone well beyond a tipping point, and is rapidly creating the environment for databases and networks of neurological scale, and a whole new way of thinking – artificial intelligence.

Those changes have created new possibilities in many fields, including the development of the worldwide gambling industry. Distributed ledger technologies and, in particular, bitcoin was first created in 2009. Ten years later, they have already become sufficiently prominent that gambling regulators have been forced to consider and regulate their use. Given that acceleration, it will surely be only a matter of four or five more years before they become a mainstream form of consumer currency. Second, artificial intelligence is beginning to show its worth as a way of automating some of the processes that most concern operators and regulators: social responsibility, player verification and anti-money laundering. To give one example, automated age verification by use of facial recognition technology is likely to become a practical reality in the next 12 months. At present, many operators are still using some fairly crude flags to indicate when a player is gambling unwisely or acting suspiciously and most of these have ultimately to be judged by fallible humans. We can expect, as the number of data points increases and the ways of assessing behaviour become more subtle, that standards will be able to be created through the use of automated tools to make player identification, monitoring and self-exclusion a much more scientific, accurate and objective process.

Another area where technology is creating change is in the environment in which gambling takes place. There was a time when gambling was confined to casinos and other specific premises. Then the internet allowed gambling to become home-based for the first time, and there were increasing attempts using live-dealer experiences and virtual reality to mimic premises-based gambling but with the comforts of home. Next, we saw the diversification of gambling products and a blurring of the whole entertainment space, with social gaming and e-sports creating completely new kinds of experience, and we have also seen a return to premises-based entertainment, but where a fusion of technologies mean that games can be played seamlessly from device to premises, on a single account. In other words, the ubiquity of gambling behaviour has become like the ubiquity of mobile technology and social media itself.

At the same time as these technological changes are democratising access to gambling, the 'grey' markets are drying up. More and more legislators are addressing themselves to the regulation of international gambling and the creation of models for regulation and taxation. The Wild West of 20 years ago has become a tamer place. Also, while the dominance of certain social media technologies is creating opportunities, it is also effectively restricting diversity of approach down into necessary and fewer effective routes to market. In other words, to be effective, gambling operators need not only the approval of their regulators, but also, increasingly, the companies that allow them to deliver their product. Many opinions on the legality of operations are now being drafted not to convince regulators but more to persuade banks and media providers of a product's legality. The industry faces an ongoing challenge to ensure that big business views gambling operators as a legal and acceptable form of entertainment and commerce. The need for the industry to remain a convincing advocate of its own propriety has never been greater.

In the context of these changes, there is surely an important place for an annual review of the world of gambling law. I close by thanking my co-authors and the editorial team at The Law Reviews, for their organisation and encouragement. I very much look forward to our fifth edition, with still more content and diversity, by which time I will formally have decided that the Gambling Law Review has indeed developed into an authority.

1 Eubulides of Miletus is said to have conjectured about taking consecutive grains away from a pile of sand. When does the heap cease to be a heap and become merely a pile? The Sorites paradox takes its name from the Greek word for 'pile'. 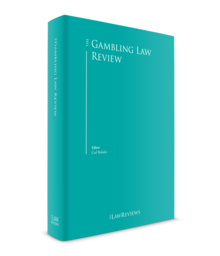