It is our pleasure to introduce the seventh edition of The Government Procurement Review.

Our geographic coverage this year remains impressive, covering 17 jurisdictions, including the European Union, and the continued political and economic significance of government procurement remains clear. Government contracts, which are of considerable value and importance, often account for 10 to 20 per cent of gross domestic product in any given state, and government spending is often high profile, with the capacity to shape the future lives of local residents.

It is frankly depressing to have to refer in the future tense to Brexit for the third successive edition. However, it remains the case that the United Kingdom continues to recognise the importance of procurement law both during and beyond any ratified transitional period. Her Majesty's Government has pronounced itself committed to the need for continued regulation of procurement, and has secured approval from the World Trade Organisation for the United Kingdom to become party to the Agreement on Government Procurement (GPA) in its own right, rather than through the European Union, once Brexit happens.

In the UK and EU we are starting to see increasing use of the national legislation emerging from the Concessions Directive and there is also a growing body of case law on the Hamburg exception.

UK practitioners are coming to terms with the Court of Appeal's landmark decision in the Faraday case, which has called into question the use of what had become reasonably widely utilised approaches to avoid the application of the procurement rules where a developer initially had a right (rather than an obligation) to carry out works. That case will continue to have wide-ranging implications for real estate development affected by procurement law.

Looking further afield, it is clear that law and policy on government contracting continue to be shaped by political developments at national and international level:

When reading chapters regarding European Union Member States, it is worth remembering that the underlying rules are set at EU level. Readers may find it helpful to refer to both the European Union chapter and the relevant national chapter, to gain a fuller understanding of the relevant issues. So far as possible, the authors have sought to avoid duplication between the EU chapter and national chapters.

Finally, we wish to take this opportunity to acknowledge the tremendous efforts of the many contributors to this seventh edition as well as the tireless work of the publishers in ensuring that a quality product is brought to your bookshelves in a timely fashion. We hope you will agree that it is even better than the sixth edition and we trust you will find it to be a valued resource. 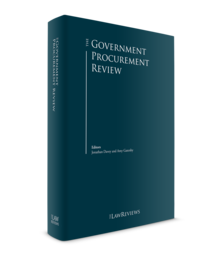