Arbitration in Nigeria is regulated by two pieces of legislation: the federally enacted Arbitration and Conciliation Act, contained in Chapter A18 of the Laws of the Federation of Nigeria 2004 (ACA) and the Arbitration Law of Lagos State2 (Lagos State Law). The reason there is a federal law regulating arbitration is historical: prior to the promulgation of the ACA as a federal decree by Nigeria's federal military government in 1988, most states in the federation had their own laws regulating arbitration within their own territory. This was because, under the legislative lists in Nigeria's Constitutions of 1960, 1963 and 1979, the power to make laws regulating contracts lay with the states (or regions pre-1967). During the period of military government, Nigeria was a federation in name only, and the federal government made laws in respect of matters that state governments were constitutionally empowered to legislate upon. After 29 May 1999, when the current constitutional provisions took effect, it became possible for state legislatures to once more enact legislation regulating arbitration within their respective territories. Thus far, only Lagos State has enacted a law regulating arbitration.

The ACA, which is based on the UNCITRAL Model Law, governs both domestic and international arbitration. Part I of the ACA applies to domestic commercial arbitration, while Part III of the ACA applies only to international commercial arbitration. The Lagos State Law makes no distinction between domestic and international arbitration, and draws heavily on the English Arbitration Act, as well as incorporating some of the 2006 amendments to the UNCITRAL Model Law. Notable provisions introduced by the Lagos State Law to remedy perceived shortfalls in the ACA include Sections 21 to 30 of the Lagos State Law, which empower the court to issue interim measures, whether in the form of an award or in another form, or to maintain or restore the status quo pending the determination of the dispute. These provisions capture two scenarios: where a party approaches the court and makes an application for an interim measure before or during arbitral proceedings; and where the arbitrator grants an interim measure in the form of an interim award and such interim award needs to be enforced by the court.

The courts play a supportive and supervisory role over arbitral tribunals, and both laws limit the extent of the courts' intervention in arbitral proceedings. Some of these are applications to court for the enforcement and setting aside of an award, applications seeking coercive orders, or applications for a stay of proceedings or the appointment of an arbitral tribunal. There are no specialist tribunals for arbitration in Nigeria: matters related to arbitration must go to a high court in the first instance, and appeals may be made to the appellate courts. Nigeria has both federal and state high courts, and the high court to which matters related to arbitration must be referred is determined by the subject matter of the arbitration, with matters within the exclusive jurisdiction of the Federal High Court going to that court and all others to state high courts.

Arbitration is widely accepted in Nigeria, and there is an increasing use of arbitration as a means of resolving commercial disputes.

II THE YEAR IN REVIEW

Nigerian courts continue to act in an arbitration-friendly manner, which is shown by the courts' attitude towards intervening in disputes where the parties have opted to use arbitration. In a decision delivered by the Federal High Court3 in March 2019, the Court continued a recent line of judicial authorities in declining jurisdiction to entertain an application that invited the Court to interfere with pending arbitral proceedings by disqualifying the presiding arbitrator and the arbitral tribunal.

Nigeria does not appear to have been involved in any investor–state disputes during the past 12 months.

The arbitration community in Nigeria, comprising numerous arbitration institutions and organisations, submitted a Bill to the National Assembly seeking the repeal and re-enactment of the Arbitration and Conciliation Act. The Bill was passed by the Senate on 1 February 2018, and passed its second reading in the House of Representatives on 12 April 2018. The Bill, which aims to address issues identified as problematic in the present legislation, resulting from judicial decisions, and to incorporate amendments to the UNCITRAL Model Law, appears to have been stalled in the National Assembly, as there has been no progress for more than a year.

1 Babajide Ogundipe is a founding partner, Lateef Omoyemi Akangbe is a partner and Benita David-Akoro is an associate at Sofunde, Osakwe, Ogundipe & Belgore. 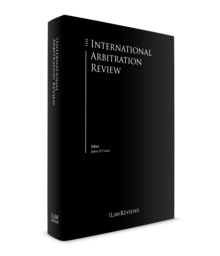 Other chapters on Nigeria

All titles on Nigeria