We vividly remember that when we were young(er), we were told that time would go faster as we got older. With the impetuousness of youth, we dismissed this as nonsense, but – like many things told when young – it has proven to be true. We say this because the five years during which we have been editors has really flown. Yet, in this short period, the dynamics of trade have fundamentally changed in a disturbing manner. By means of illustration, we look at three trade-shattering events, starting with a regional one and moving on to two more fundamental problems.

First, as also noted last year, the spectre of Brexit is looming ever closer. With the EU stepping up its preparations to confront a 'hard' Brexit, the United Kingdom appears to refuse to face that possibility and continues to sleepwalk into the abyss, at least that is, respectfully, our modest continental view.

Second, the dynamics of the interwoven jumbo economy of 'Chimerica' continue to be rewritten and deteriorate as we speak, with trade policies being abused as instruments to meet political goals.1 And even if a 'good, fair and “largest ever” deal' were clinched, the painful repercussions of all unnecessary rhetoric and bellicose escalations may take years to normalise.

Third, and arguably even more fundamental, the asphyxiation of the Appellate Body slowly continues, despite multiple attempts by over 20 members to rewrite the Appellate Review process and find creative solutions. Unfortunately, the deadline of 10 December 2019 is, at the time of going to press, only three months away. After that day, members can no longer claim their 'ticket' for a proper traditional Appellate Review, thereby putting the continued existence of one of the best international dispute settlement systems in doubt. As Professor Van den Bossche rightly pointed out: '[H]istory will not judge kindly those responsible for the collapse of the WTO dispute settlement system.'2

In this regard we underline the desire that some have rightfully expressed: if only we could press a reset button so that 1995 could start again! The trade world at the time was full of desire to move from its power-oriented regime into a rules-based system. Hence, the leap from the GATT to the WTO was made, along with, most notably, the creation of the Appellate Body. Now, with that priceless institution on the brink, we continue to hope for a last-minute solution.3

In short and simplistic terms, trade law, born and grown after the Second World War, appears to be aging. While some might say that this is part of adolescence, others would argue that we are in the midst of a full-blown mid-life crisis. Whichever it is, we find ourselves in an undefined status, with increased decision-making, increased pressures and a search for a new self.

Returning to the specifics of this fifth edition, we wish to warmly thank our ever-faithful contributors. Once again, they have very nicely described, summarised and analysed all the main events in their respective key jurisdictions. Notably we wish to thank two new guest contributors, Michael-James Clifton and Pekka Pohjankoski, both from the bench, for opening up whole new perspectives and dynamics for The International Trade Law Review. And, on a closing note, as before, we wish to thank our publishers and, especially, our ever-growing and active audience who have supported us throughout this first lustrum.

Having said all that, we remain deeply committed to this publication in these challenging times and we wish you all happy reading.

1 As one example, we recall record duties being unilaterally imposed, with no plausible prima facie legal justification – also setting a bad example to other members.

3 The irony being that the people who are currently shutting down the system have an open nostalgia as well, except that they wish to time-travel back further, to the pre-1995 power-based system, convert the WTO into the GATT, and eliminate the Appellate Body. 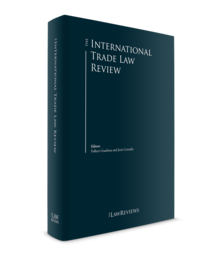