It is commonplace for the senior management of a business to describe their employees as the best assets that the business has. Equally, in troubled times, it not unusual to find employers voicing concern that employees may vote with their feet and leave the organisation (irrespective of any legal claims they may have) to work for competitors.

However, the truth of the matter is that, in many jurisdictions, fine words about the rights of employees are mixed with an increasingly uncertain future for employees. One frequently hears comments about the future impact of technology on many types of jobs. This technology will know no boundaries and the only safe prediction is, I think, that the jobs most affected will include some surprises. Already we see significant friction between the attempts by businesses to organise employees into a low-cost, allegedly lower-skilled and fully flexible workforce and the conflicting desires of employees and, in many countries, legislators to have stable employment relationships underpinned by statutory and contractual rights. The battles that Uber and other 'disrupters' are facing are symptomatic of that tension.

In the United Kingdom, of course, we have now seen Brexit, finally, become a reality, although the detail of what this will mean for employers and employees remains frustratingly vague.

A similar phenomenon is at play in relation to the #MeToo movement, and its impact on workplace behaviours and relationships. The desire for those in the workplace to inhabit an environment free of unlawful discrimination has undoubtedly made progress, giving voice to employees who might previously have felt, for legal, cultural or commercial reasons, that they had no option but to accept inappropriate behaviour. The corollary of this strengthening of employees' rights is that it makes the workforce less insecure.

Indeed, in the United Kingdom, the extended debate about the degree to which it is ever permissible for employers to use non-disclosure agreements to resolve matters privately is an indication of how far the debate has moved. A time-travelling employment lawyer from 10 years ago (if such an individual existed) would be astonished at the pace of change.

In these circumstances, a book such as The Labour and Employment Disputes Review offers an opportunity not only to look at the bigger themes, but also to measure some of the changes taking place, year on year, as the world of work continues to evolve. 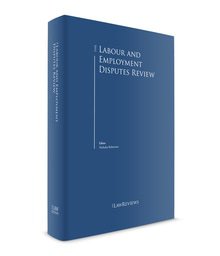