2018 was the year of the mega-deal, with an unprecedented number of big-ticket mergers taking place across a range of jurisdictions and sectors. In the first six months of 2018, global deal value rose by 59 per cent compared to 2017, despite volumes falling by 12 per cent. Although there was a considerable drop off in activity in the second half of the year, 2018 nonetheless saw robust overall performance by market participants, with global activity in 2018 exceeding US$3 trillion for the fifth consecutive year.

The United States remained the most targeted and acquisitive region globally in 2018; however, the deal-making landscape in the US for the remainder of 2019 presents a mixed picture. On the one hand, tax reform, a more relaxed US regulatory climate and growing cash reserves present a favourable environment for investors. On the other, dealmakers are likely to be concerned by the trade dispute between the US and China – which is already threatening economic growth and, at the time of writing, shows no sign of abating – and the ongoing uncertainty regarding antitrust policies, which may lead to increased scrutiny of M&A deals.

In Europe, after a record-breaking start to the year, the prolonged uncertainty caused by stuttering Brexit negotiations and wider political tensions across the continent finally caught up with dealmakers in the second half of 2018. In line with a softening of the global economy, the value of European deals in H2 plummeted to its lowest level since 2013, and the volume of transatlantic deals between North America and Europe also fell by 29 per cent year-on-year.

One of the main disruptors to M&A activity over the past 12 months has been the rise in political intervention in cross-border deals. In particular, concerns over national security have led to the tightening of foreign investment regimes and antitrust regulations, coupled with more active enforcement by regulators. This growth in protectionism is likely to remain one of the main obstacles facing dealmakers in the near future.

Nevertheless, looking forwards into the remainder of 2019, there is certainly cause for optimism: private equity continues to enjoy record-breaking levels of dry powder, and developments in technology are driving both the sector itself and the facilitation of deals more broadly. Finally, and perhaps most importantly, the past 12 months have highlighted the resilience of companies and private equity firms in their navigation of global political uncertainty and economic shifts.

I would like to thank the contributors for their support in producing the 13th edition of The Mergers & Acquisitions Review. I hope the commentary in the following 47 chapters will provide a richer understanding of the shape of the global markets, and the challenges and opportunities facing market participants. 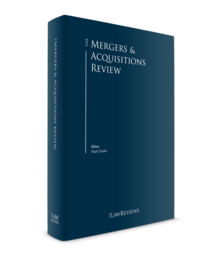