The Projects and Construction Review - Edition 9

Project financing and construction law are highly specialised areas of legal practice. They are intrinsically functional and pragmatic, and require the combination of a multitasking group of professionals – owners, contractors, bankers, insurers, brokers, architects, engineers, geologists, surveyors, public authorities and lawyers – each bringing their own knowledge and perspective to the table.

I am glad to say that we have contributions from new jurisdictions in this edition: Ghana and the Philippines. Although there is an increased perception that project financing and construction law are global issues, the local knowledge offered by leading experts in 19 countries has shown us that to understand the world, we must first make sense of what happens locally; to further advance our understanding of the law we must resist the modern view (and vice?) that all that matters is global and what is regional is of no importance. Many thanks to all the authors, and their law firms who graciously agreed to participate.

Finally, I dedicate this ninth edition of The Projects and Construction Review to a dear friend, the late John (Jack) Bernard Tieder, Jr, who died on 3 December 2017. Jack was the founding partner of Watt, Tieder, Hoffar & Fitzgerald LLP and the Global Construction and Infrastructure Law Alliance. He is much missed and I am most grateful for his friendship, and all his support and guidance during my path as a construction lawyer. He leaves behind a large extended family and many close friends and esteemed associates around the world.

Jack Tieder was one of the doyens of the International Construction Bar.

Graduating from John Hopkins University and Syracuse and American University School of Law in 1971, he commenced practice as lawyer with the firm of Lewis Mitchell & Moore where he progressed to the ranks of partnership. In 1978 he was a founding partner of the firm then called Watt Tieder Killian & Hoffar and was the senior partner of the firm now known as Watt Tieder Hoffar & Fitzgerald from March 1978 until his passing.

Over the course of his career he contributed to international construction projects practice through the establishment of project delivery and financing structures that ensured success for many major projects around the world. As counsel in court and arbitration he was formidable.

Jack though was more than an attorney. He was a contributor to legal education around the world and to the development of collegiate practice of construction law in the United States and elsewhere in the world. An example only was his foundation fellowship of the American College of Construction Lawyers.

I knew Jack for many years and his commitment in a variety of ways outside the law to the assistance of young people wanting to make their way in the law and to education of lawyers in parts of the world outside his home country was quite extraordinary. For many years he coached teams at the Willem C Vis Moot and regularly lectured in eastern Europe and Russia to local practitioners to bring to them an international perspective of the practice to which they aspired.

Jack was a runner of some note, who during his life maintained a fitness regime that was the envy of his friends. His expertise in, and love of, beer was legendary.

In recent times, Jack undertook a significant amount of work as an arbitrator and it has been my privilege to sit with him in that role. His experience of practice around the world equipped him well to decide disputes in the international construction context and his capacity for incisively cutting to the chase on the key issues in complex cases was awe-inspiring.

In a case recently concluded I worked with Jack in hearings during the period in which he was undergoing some quite significant medical procedures. His cheerful acceptance of what for many would be regarded as seriously debilitating effects of surgery and other treatment was inspiring to those of us who were working with him. His mind remained sharp until the end and in very recent times his dedication to the conclusion of issues in the case was remarkable, his work insightful and his judgement impeccable. Upon recent news of the return of his illness, he faced the position with courage and amazing good humour.

We have lost a giant of the construction law industry, who will remain a legend to all who knew him.

It has been our privilege to have Jack as a Fellow and mine to have him as a colleague and a friend.

He will be missed by all of us, but not nearly as much as by Rufus and the family. At this time all our thoughts and prayers are with Rufus and the children and grandchildren with whom doubtless the memories of Jack's personality and contribution to their lives will remain strong forever. 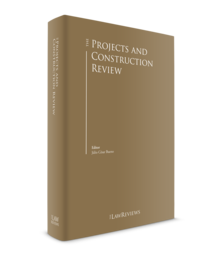 We are very pleased to present the fifth edition of The Public-Private Partnership Law Review. Notwithstanding the number of chapters in various publications in The Law Reviews series on topics involving public-private partnerships (PPPs) and private finance initiatives (in areas such as projects and construction, real estate, mergers, transfers of concessionaires’ corporate control, special purpose vehicles and government procurement), we identified the need for a deeper understanding of the specific issues related to this topic in different countries.