In the reports from around the world collected in this volume, we continue to see a good deal of international overlap among the issues and industries attracting government enforcement attention. Indeed, there are several examples of cross-border engagement in the chapters that follow, including discussions of parallel investigations in multiple jurisdictions. We also read of bilateral and multilateral exchanges between and among various countries' competition officials, including a report from Turkey noting its entry into memorandums concerning international cooperation with several Balkan countries last year.

We continue to see the evolution and refinement of approaches to competition law enforcement in several jurisdictions. For example, our Argentine contributors provide an informative discussion of a new Antitrust Law, enacted following 'many years of effort by practitioners and authorities.' The authors note that this new law introduces 'significant changes to antitrust enforcement in Argentina.' Notably, in this edition we welcome for the first time in the Review a contribution from Indonesia, which provides an informative overview of competition enforcement there.

Cartel enforcement remains robust. In the pages that follow, we read that, late last year, the Italian Competition Authority levied 'its largest ever overall fine in a cartel case'. This case involved automotive companies' captive banks, which provide consumer financing. A record administrative penalty was also assessed by South African authorities in connection with allegations related to an alleged auto parts cartel. While the chapter from China notes that fines in 2018 were 'relatively low compared with . . . previous years,' it also points to a 'significant increase in the number of cartel cases'. Meanwhile, leniency applications have increased in both India and in France, where our contributors suggest the uptick 'could be explained by the increasing number of small and medium-sized companies applying for leniency'. In 2018, Canada revised its immunity and leniency programmes, and those revisions are discussed in that chapter.

Online platforms – and the 'digital economy' more generally – have been the subject of regulatory scrutiny by European Union, French, German, Japanese, Swedish, Taiwanese, and British authorities, among others. These chapters contain useful discussions of developments in those areas. In addition, the EU Overview provides a helpful primer on the record fine imposed by the European Commission on Google related to internet search and its Android operating system. Italian authorities released preliminary results of an investigation into 'big data' and called for regulation in that area. The chapters from France and Germany highlight a cooperative study being conducted by the Autorité de la Concurrence and the Bundeskartellamt concerning competitive effects of algorithms. Elsewhere in the areas of restrictive agreements and dominance, authorities in Greece issued fines in two cases that included allegations of resale price maintenance, a practice that was also met with scrutiny by authorities in Poland. Both Italian and Polish authorities focused on issues of dominance in the utilities sector.

Merger review and enforcement activity remains robust. The chapters that follow note activity in many diverse sectors. The United States chapter discusses the recent news of the government losing its appeal in the AT&T/Time Warner case: the appeals court there ruled that the lower court did not commit a clear error when it denied the government's request to block that deal. Several chapters – including the submissions from Argentina, Brazil, Canada, China, India, Mexico, and the United States – discuss investigations of the Bayer/Monsanto deal. China conditionally cleared the Essilor/Luxottica deal in the eyeglasses industry, while Italy cleared a different Luxottica deal with conditions. The United Technologies/Rockwell Collins deal is discussed in the China and United States chapters; and the Praxair/Linde deal is discussed in the Brazil, India, and United States chapters. Both Argentine and Colombian authorities issued updates to their merger review guidelines, which are discussed in the respective chapters. Similar to last year, the report from China notes several enforcement actions arising from reporting violations.

Particularly notable again this year is the chapter from the United Kingdom, as authorities there adapt to a post-Brexit enforcement regime. Readers will be quite interested in the informative discussion of the effect of Brexit on the future of competition enforcement. In that regard, the authors discuss recent guidance from the Competition and Markets Authority (CMA), potential consequences of various Brexit scenarios, and the expected increase in the CMA's workload. We will watch with interest to see how Brexit may affect competition enforcement in the United Kingdom and the European Union in the year to come. 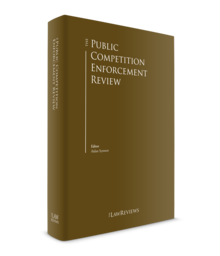