I OVERVIEW OF THE MARKET

The Venezuelan market is less active than other markets in Latin America, mainly because of political and economic instability, high inflation rates and the consequent reduction of foreign investment.

Real estate ownership and transactions are very common, as they are often used as a way to counter the effects of the high inflation rates and foreign exchange controls. However, these transactions still mainly follow traditional models compared with the real estate M&A and real estate private equity transactions seen in other countries in the region.

The level of real estate transactions in recent years for domestic deals was moderate and mainly fuelled by purchases or sales by local subsidiaries of multinationals in Venezuelan and foreign investors with high risk appetite. The main transactions taking place in Venezuela are related to the purchase, sale, construction, financing, development and acquisition of office buildings, sports training centres, retail stores, hotels and shopping centre projects.

Real estate private equity activity has moderately increased in Venezuela in recent years, with certain international investment funds expecting significant profits in the future if the situation of the country improves.

i Legal frameworks and deal structures

In general, M&A transactions in Venezuela are conducted in a fashion similar to that in other jurisdictions:

A purchase agreement generally contains representations and warranties, and indemnification and closing conditions customary for M&A transactions in other jurisdictions. Given the rapidly changing regulatory environment, the conditions for closing are frequently the subject of lengthy negotiations between seller and purchaser. One particular difference from other countries is that in Venezuela the purchase agreement is generally concluded between the purchaser and the shareholder, or shareholders, of the target company, instead of the target company itself. On the other hand, there is no procedure in Venezuela that allows the squeeze-out of shareholders of a Venezuelan company. These general rules would also apply to real estate M&A transactions.

There has been no significant hostile takeover activity in Venezuela in general or with regard to public real estate companies since there are actually very few publicly listed companies in Venezuela. Several of these companies have, however, implemented (or, from time to time, continue to implement) traditional defences against hostile takeovers in line with existing international standards, such as repurchases, poison pills and supermajority provisions, among other measures.

There is very limited financing available for deals as a result of existing current local economic and political conditions.

In addition, since 2019, Venezuela created a wealth tax with a rate of 0.25 per cent on net wealth, which also applies to the ownership of local real estate.

There are no special tax rules governing the disposition or acquisition of real estate located in Venezuela by foreign investors. Therefore, foreign investors in real estate sometimes structure a sale of real estate located in Venezuela through a sale of the shares of a target company owning the real estate. In such cases, the Venezuelan income tax treatment of any capital gain realised on the sale of the shares of the target company may vary if the seller is a tax resident of a country with a double taxation agreement with Venezuela. Some of the double taxation agreements entered into by Venezuela assign the right to the source state to tax the capital gains realised on the transfer of shares deriving more than 50 per cent of their value directly or indirectly from immovable property situated in the source state.

Foreign acquirers typically purchase real estate through a Venezuelan company owned by a foreign company to obtain a more favourable tax treatment if the real estate is intended to be leased. This is because lease payments made to Venezuelan companies are subject to a 5 per cent income tax withholding, whereas lease payments made to foreign companies may amount to up to 34 per cent.

As Venezuela faces a major political and economic crisis, it has become a distress play for investors willing to bear a high level of risk and bet on a regime change in the foreseeable future or at least some change in government policies affecting the economy. 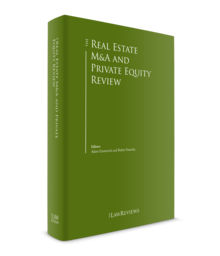 Other chapters on Venezuela

All titles on Venezuela