I am very pleased to present this twelfth edition of The Restructuring Review. As with the previous editions, our intention is to help general counsel, private practice lawyers and the public sector understand the conditions prevailing in the global restructuring market in 2019, and to highlight some of the more significant legal and commercial developments and trends that have been evident in recent years, and that are expected to be significant in the future.

In what appears to be a growing trend, the global economic situation, particularly for European and other Western countries, continues to be uncertain. Despite the modest strengthening of global GDP in recent years, unresolved trade tensions between the United States and China continue to unsettle markets and European countries remain in the grip of an ongoing impasse over Brexit.

According to figures published by the International Monetary Fund (IMF), global GDP growth is expected to fall from 3.6 per cent in 2018 to 3.3 per cent in 2019, with growth in the European Union falling from 2.1 per cent to 1.6 per cent over the same period. Political instability in the European Union shows no signs of abating, and remains highly visible in movements such as the 'gilet jaunes' in France or success of populist political parties in the European Parliament elections held in May 2019. The extent of national public debt and non-performing loans in the eurozone also continue to present a major challenge to eurozone economies and the legacy of the 2008 crash is still readily apparent in countries such as Italy and Greece. Although the European Central Bank (ECB) made good on its promise to end quantitative easing by the end of 2018, interest rates in the eurozone remain at record lows and the impending departure of Mario Draghi as ECB president leaves something of a question mark over the future trajectory of European monetary policy.

More broadly, the tensions surrounding the Middle East and Russia show no indication of being resolved, and differences in global attitudes to climate change are beginning to reveal a new, and potentially very significant, source of contention between the world's major powers.

With the ever-increasing significance of the Chinese and other Asian economies on the world stage, it is also notable that the seemingly endless trend of high-paced growth appears to be slowing, with IMF figures predicting a fall in Chinese growth from 6.6 per cent in 2018 to 6.3 per cent in 2019, and a continued decline in subsequent years. Effects are bound to be felt on the global stage as the world adapts to the slowdown.

While, of course, unforeseen circumstances have a tendency to derail even the most cautious of predictions, uncertainty and financial stress are usually good indicators that a turn in the economic cycle is approaching. As such, the twelfth edition of this work continues to be relevant and important, in particular, as a result of the increasingly cross-border nature of many corporate restructurings.

As ever, I would like to extend my gratitude to the contributors from some of the world's leading law firms who have given such valuable support and cooperation in the preparation of this work, and to our publishers, without whom this work would not have been possible. 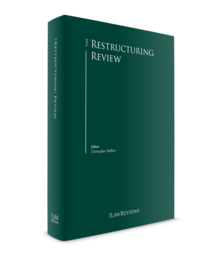 This book provides an introduction to the basic elements of international franchising and an overview of the way that it is regulated in 37 jurisdictions. It seeks to provide the reader with a high-level understanding of the challenges involved in international franchising in the first section, and then, in the second section, explains how these basic themes are reflected in the regulatory environment within each of the countries covered.