This fifth edition of The Securities Litigation Review is a guided introduction to the international varieties of enforcing rights related to the issuance and exchange of publicly traded securities.

Unlike most of its sister international surveys, this review focuses on litigation – how rights are created and vindicated against the backdrop of courtroom proceedings. Accordingly, this volume amounts to a cross-cultural review of the disputing process. While the subject matter is limited to securities litigation, which may well be the world’s most economically significant form of litigation, any survey of litigation is in great part a survey of procedure as much as substance.

As the chapters that follow make clear, there is great international variety in private litigation procedure as a tool for securities enforcement. At one extreme is the United States, with its broad access to courts, relatively permissive pleading requirements, expansive pretrial discovery rules, readily available class-action principles and generous fee incentives for plaintiffs’ lawyers. At the other extreme lie jurisdictions like Sweden, where private securities litigation is narrowly circumscribed by statute and practice, and accordingly quite rare. As the survey reveals, there are many intermediate points in this continuum, as each jurisdiction has evolved a private enforcement regime reflecting its underlying civil litigation system, as well as the imperatives of its securities markets.

This review reveals an equally broad variety of public enforcement regimes. Canada’s highly decentralised system of provincial regulation contrasts with Brazil’s Securities Commission, a powerful centralised regulator that is primarily responsible for creating and enforcing Brazil’s securities rules. Every country has its own idiosyncratic mixture of securities lawmaking institutions; each provides a role for self-regulating bodies and stock exchanges but no two systems are alike. And while the European regulatory schemes have worked to harmonise national rules with Europe-wide directives – an effort now challenged by the (possible) imminent departure of the United Kingdom from the European Union – few countries outside Europe have significant institutionalised cross-border enforcement mechanisms, public or private.

Equally notable is the fragmented character of securities regulation in nearly every important jurisdiction. Alongside the powerful national regulators are subsidiary bodies – stock exchanges, quasi-governmental organisations, trade and professional associations – with special authority to issue rules governing the fair trade of securities and to enforce those rules in court or through regulatory proceedings. Just as the world is a patchwork of securities regulators, so too is virtually each individual jurisdiction.

A further ambition of this review is to observe and report important regulatory and litigation trends, both within and among countries. This perspective reveals several significant patterns that cut across jurisdictions. In the years since the financial crisis of 2008, nearly every jurisdiction reported an across-the-board uptick in securities litigation activity. Many of the countries featured in this volume have seen increased public enforcement, notably including more frequent criminal prosecutions for alleged market manipulation and insider trading, often featuring prosecutors seeking heavy fines and even long prison terms.

This suggests the final ambition for The Securities Litigation Review: to annually reflect where this important area of law has been, and where it is headed. Each chapter contains both a section summarising the year in review – a look back at important recent developments – and an outlook section, looking towards the year ahead. The narrative here, as with the book as a whole, is of both convergence and divergence, continuity and change – with divergence and change particularly predominant in recent years, following political upheaval in the United States and Britain that could herald a sharp break from international cooperation and forceful government regulation in the global finance capitals of New York and London.

Many thanks to all the superb lawyers who contributed to this fifth edition. For the editor, reviewing these chapters has been a fascinating tour of the securities litigation world, and we hope it will prove to be the same for our readers. Contact information for our contributors is included in Appendix 2. We welcome comments, suggestions and questions, both to create a community of interested practitioners and to ensure that each edition improves on the last. 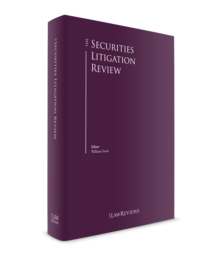 The Dispute Resolution Review provides an indispensable overview of the civil court systems of 37 jurisdictions. It offers a guide to those who are faced with disputes that frequently cross international boundaries. As is often the way in law, difficult and complex problems can be solved in a number of ways, and this edition demonstrates that there are many different ways to organise and operate a legal system successfully. At the same time, common problems often submit to common solutions, and the curious practitioner is likely to discover that many of the solutions adopted abroad are not so different to those closer to home.

The objective of this book is to provide tax professionals involved in disputes with revenue authorities in multiple jurisdictions with an outline of the principal issues arising in those jurisdictions. In this, the seventh edition, we have continued to add to the key jurisdictions where disputes are likely to occur for multinational businesses. Each chapter provides an overview of the procedural rules that govern tax appeals and highlights the pitfalls of which taxpayers need to be most aware.