More than ever, broadband connectivity goals are the focus of policymakers and are driving law and policy in this sector. New technologies and new ways of connecting people call for decision-makers to move away from old paradigms and embrace new ones. Indeed, facilitating digital inclusion, extending the economic and social benefits of connecting all citizens, and growing local economies by ensuring that affordable connectivity is available, are universal goals that require bold decisions and new approaches.

New expectations of being connected everywhere, and at all times, are driving the development of broadband service on aeroplanes, vessels, motor vehicles and trains, to support the needs of passengers, crew and the airlines themselves as they move to digitise their fleets and transmit the massive amounts of operational data generated by today's aircraft. Accommodating these new mobility services create pressures on the existing spectrum environment. And the different technologies that seek to meet these mobility needs are not always compatible with one another. As a result, regulators (1) sometimes provide more flexibility to allow spectrum to be used to provide a broader range of services, and (2) sometimes 'refarm' existing spectrum bands so that new services and technologies can access spectrum previously set aside for other purposes.

The World Radio-communication Conference (WRC) of the International Telecommunication Union (ITU), being held this month in Sharm-El-Sheikh, will address many of these key issues, and make changes in some long-standing radio spectrum allocations, particularly the 'millimetre-wave' bands that offer the promise of providing untold amounts of capacity and even faster service speeds by a variety of technologies. As with most policy choices, the conference likely will include some political decisions. Indeed, political pressures already exist around the world in decisions being made by national regulators outside of the ITU process.

Many governments are investing in or subsidising broadband networks to ensure that their citizens can participate in the global economy, and have universal access to the vital information, educational, health-related and entertainment services now available over the internet. Many governments are re-evaluating how to regulate broadband providers, whose networks have become essential to daily life. However, many policymakers still have not solved the problem caused when their incumbent service providers fail to extend service to all of their citizens for business reasons – because those businesses deem 'unprofitable' those who are the hardest to serve. Curiously, policymakers sometimes exacerbate this failure by resorting to spectrum auctions to award the right to provide service in a given frequency band to the highest bidder, failing to require service availability to everyone in the auctioned area, and then making the auction winner the gatekeeper for anyone else who wants to use the same spectrum. Too often, decisions are based (explicitly or implicitly) on expected auction revenues, which consumers end up paying for in the end through higher costs of service. But even this may start to change as the wireless providers who once relished auctions are coming to realise that the price they have to pay via auctions is just too high.

Far too infrequently do policymakers factor in the benefits of ensuring ubiquitous connectivity: new jobs, economic growth, security, social inclusion, and improvements in healthcare, education and food production, to name a few. Indeed, treating spectrum as a property right rather than as the valuable public resource it is often leads to undesirable results in the marketplace.

Convergence, vertical integration and consolidation can also lead to increased focus on competition and, in some cases, to changes in the government bodies responsible for monitoring and managing competition in the TMT sector. Similarly, many global companies now are able to focus their regulatory activities outside their traditional home base, and in jurisdictions that provide the most accommodating terms and conditions.

Changes in the TMT ecosystem, including increased opportunities to distribute video content over broadband networks, have led to policy focuses on issues such as network neutrality: the goal of providing stability for the provision of the important communications services on which almost everyone relies, while also addressing the opportunities for mischief that can arise when market forces work unchecked. While the stated goals of that policy focus may be laudable, the way in which resulting law and regulation are implemented has profound effects on the balance of power in the sector, and also raises important questions about who should bear the burden of expanding broadband networks to accommodate capacity strains created by content providers and to facilitate their new businesses.

The following chapters describe these types of developments around the world, as well as the liberalisation of foreign ownership restrictions, efforts to ensure consumer privacy and data protection, and measures to ensure national security and facilitate law enforcement. Many tensions exist among the policy goals that underlie the resulting changes in law. Moreover, cultural and political considerations often drive different responses at the national and the regional level, even though the global TMT marketplace creates a common set of issues.

I thank all of the contributors for their insightful contributions to this publication, and I hope you will find this global survey a useful starting overview of these fascinating developments in the TMT sector. 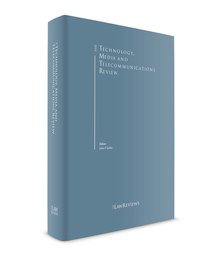